World No.1 for Retail FX Volume

GMO CLICK began offering leveraged foreign exchange trading services in Japan in October 2006, under the core values of cost leadership and ease of use, giving way to the industry’s narrowest spreads and a range of trading platform technology. In 2015, GMO CLICK released its app for Android watches, “FXWatch”, and continued to tighten spreads on a number of instruments.

So thanks to the support of our customers – GMO CLICK continues to maintain the number one spot in the world for retail FX volume, making it four years in a row since 2012! 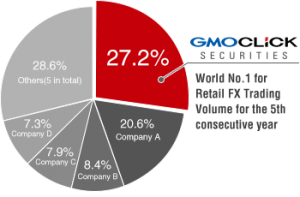 The Retail FX Broker Trading Volumes for 2016 have been announced, and it has been confirmed that GMO CLICK Securities Co., Ltd., part of the GMO CLICK Group (“GMO CLICK”) has remained No.1 in the world for retail FX trading volume in 2016, for the fifth consecutive year...

Z.com Trade, FCA-regulated and part of the Japan-headquartered GMO CLICK Group, which is the world’s largest retail forex provider by volume , has announced the launch of its new affiliate program, Z.com Trade Affiliates...