Advantages of Gold and Precious Metals Trading with XM

Gold Trading and other precious metals, along with crude oil, copper or petroleum, are hard commodities that play a major role in the commodities market and are contract-based tradable goods. The contracts based on precious metals can include futures, spot prices, forwards and options. The intermediary that enables futures contracts to be negotiated is the futures exchange, or commodity, market. Investors worldwide can access about 50 major commodity markets, with precious metals such as gold, silver, platinum and palladium as the leading tradable assets due to their high economic value and durability.

The futures exchanges market, where besides currencies and stock indices gold and other precious metals are also actively traded, is available 24 hours a day, except weekends. Generally, precious metals are purchased in two main ways: on spot contracts and on futures contracts. While spot contracts involve the physical buying or selling of these commodities for payment and delivery on the spot date (typically two business days following the trade date), futures are standardized contracts, mutually agreed on by two parties to buy or sell precious metals of a specific quantity and quality for a price agreed on (called futures price) with delivery and payment on a later date in future (called delivery date). The buying and selling of futures takes place without the actual physical ownership of the commodities traded and done via online trading.

The most frequently traded precious metals are gold, platinum, palladium and silver, and the high trading volume on these commodities is attributed to their retained intrinsic value, regardless of economic conditions. The preference for the online purchase, and even physical ownership, of precious metals as long-term investment has tremendously increased in recent decades. Trading precious metals also presents opportunities for those interested in short-term investment since derivatives and exchange-traded contracts are a less capital-intensive and simpler way to take a position on their price movements.

Unlike most commodities that are mainly dependent on production and consumption levels, gold trading prices, for instance, are not: they follow the pulse of political changes and make it possible for gold to function as a hedge against other markets in times of uncertainty. Along with gold, platinum, palladium and silver are also valuable assets and traded by investors who regard them as stores of value in times of monetary uncertainty.

There are several factors that affect price fluctuation and can cause volatility in the precious metals market. One of the most important factors are global financial institutions, whose investments are speculative in nature and can cause upward or downward price movements. Another factor that influences the market is the end-user trends, mainly triggered by jewellery buyers: the demand in jewellery makes precious metal markets prices to rise. Economy also has an impact on market prices. In a globally well-performing economy the level of wealth is directly correlated to the demand for gold and other precious metal jewellery: when investors search for investment options that present a higher risk, the prices of certain precious metals is lowered while the price of others rises. Last but not least, the changes in demand for some other financial assets apart from precious metals also contribute to price fluctuations.

Precious metals, and gold in particular, have always the symbol of wealth. As far as prehistoric times, when gold was used in bartering, and throughout the centuries, whether in the form of coins, or bars and billions of fixed purity and weight, gold has been a valuable and much sought-after asset. The first gold coins were struck in 600 BC and its use for monetary exchange (gold standard) lasted as long as the 1930s. As a highly electrically conductive and malleable metal, gold is non-reactive to other elements, and it is used in several industries from jewellery, commercial chemistry and electronics to medicine. Gold as commodity money was only replaced by the fiat currency system after 1976, but it has continued to remain a solid investment asset until today.

Along with gold, for over 4 thousand years silver has also been used for monetary exchange with the silver standard lasting until the 19th century. The industrial, commercial, and consumer demand make silver a strong asset to invest in, and derivatives like silver futures are traded on various exchange markets in the world. With the advent of online trading, silver exchange-traded products have been an easy way for investors to gain exposure to the price of silvers and invest in it long term.

As compared to gold trading and silver trading, which have been present as investment assets since ancient civilizations, platinum and palladium have a shorter history in the financial sector. However, due to their scarcity and the amount of their annual mine production, along with their various uses in several industrial areas, at times they tend to sell at a price even higher than gold. 10 times rarer then gold, platinum is associated with wealth, and white gold-platinum alloys were used as early as in the pre-Columbian civilization. The first reference to platinum in Europe was made in the 16th century, and since the 18th century it has been used in jewellery, the motor and chemical industry, dentistry and even medicine.

Similar to platinum, palladium also plays an essential role in technology. Since its discovery in 19th century Europe, global demand for palladium has largely increased, mostly in the automobile industry, but it is also widely used in medicine, the electrical industry, jewellery, and of course as an investment asset. Due to the supply and demand (i.e. the price determination in the market), in times of sustained economic stability the price of platinum and palladium can be as much as that of gold, or even higher, while their prices can fall behind the price of gold in periods of economic instability, making gold a more stable metal to invest in.

Precious metals have been some of the most popular hard commodities to trade since the 1970s. Besides currency exchange (forex) trading, investing in gold and other precious metals long-term is a worldwide popular way of portfolio risk management during times of inflation or economic/political uncertainty.

Futures contracts are so-called derivative contracts, meaning that their value derives from the performance of the underlying asset. One of the main purposes of investing in precious metals futures is risk mitigation: given the ability to the contract buyer and seller to fix prices or rates in advance for future transactions, they can both ensure against drastic or sudden price movements that may cause increased losses.

Precious metals can be traded in both directions: if the market is expected to move upwards (bullish trend) trades can be entered by purchasing a futures contract (going long) and exit the trade by selling it; while if there is anticipation of a downward movement (bearish trend), trades can be entered by selling a futures contract (going short) and exit the trade by buying a contract. The possibility is also given to trade multiple futures contracts, which involves making several separate entries and exits, that is, entering contracts at different prices and exiting at one price, or the other way round. The ability to trade in both directions allows investors to gain profits regardless of upward or downward market movements.

Advantages of Gold Trading and Precious Metals Trading with XM 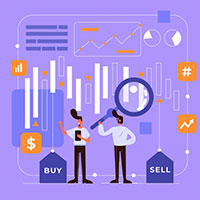