Gold on the D1 time-frame was in an extended uptrend until May 18 when a higher top was recorded at 1765.08. Supply pressure increased after that level and the market started moving lower.

After the higher top at 1765.08, the market made a lower top and in the process, the price broke through the 15 and 34 Simple Moving Averages with the Momentum Oscillator crossing into negative terrain as it pierced through the zero baseline. The fact that the market made a lower top and then proceeded to go below the previous bottom has initiated a first impulse wave of a possible new downtrend from a structural point of view. 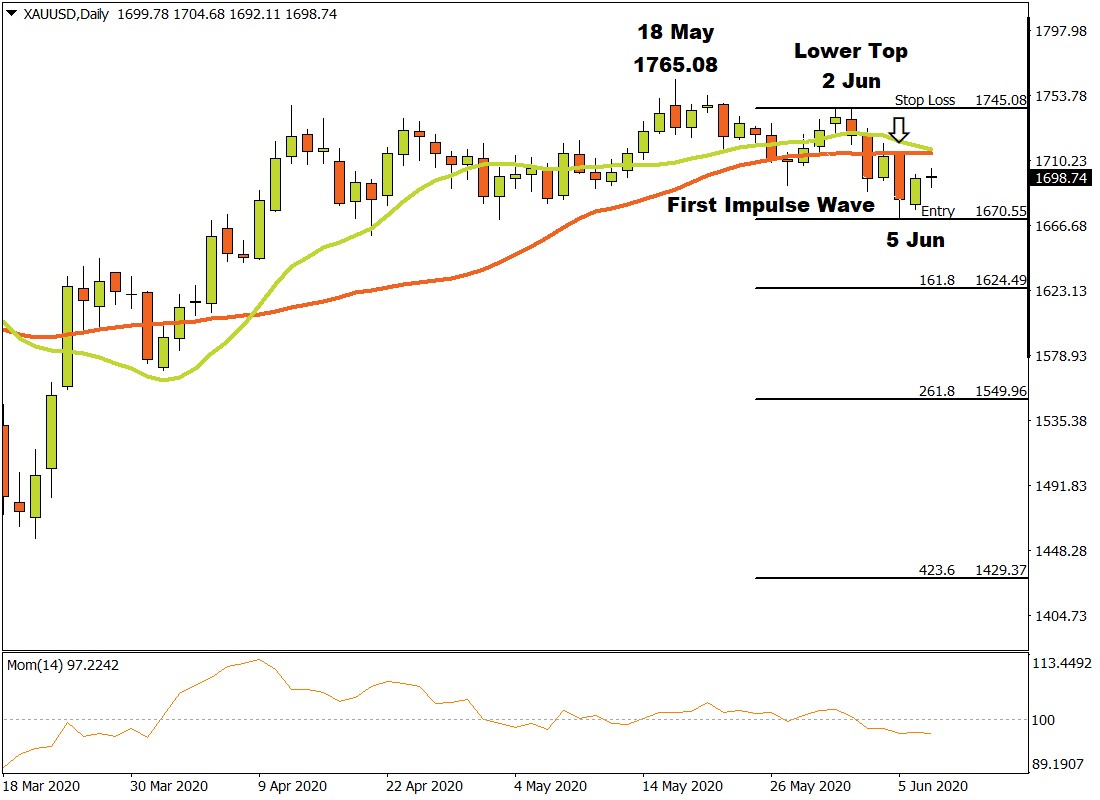 A critical support level might have started forming on June 5 at 1670.55, as buyers seems to be trying to push Gold higher.

If the resistance level at 1745.08 is broken, the scenario above are annulled and appropriate action must be taken.

As long as sellers maintain a negative sentiment and supply keeps overwhelming demand, the outlook for the Gold market on the Daily time-frame will remain bearish.

Latest surge in risk assets to be challenged by data and US Congress3 Aug, 2020

After their astonishing performance in July, Asian equities kicked off the month of August in a more mixed fashion with the major indices in China and Japan...

US real yields, which take out the expected consumer price changes from the nominal yield on bonds, are plunging at present and have fallen to their lowest levels since 2012.

Tesla shareholders are set to face a litmus test when the electric carmaker's Q2 earnings are released after US markets close on Wednesday...

Global equities begin the week on the back foot20 Jul, 2020

Shares across global markets are trading in negative territory early Monday with one exception, as China's Shanghai Composite traded 2.5% higher...

The greenback is suffering today, slumping to a one-month low as stocks surge back to reclaim the June highs. Hopes for Moderna's vaccine are elevated...

After declining 5.4% from the peak reached on May 18, gold is again flirting with the key resistance level and recent multi-year high of $1,764. The resurgence...

After years of rumours, it's now official: Apple is breaking up with Intel. At its Worldwide Developers Conference 2020, which kicked off on Monday, Apple...

Global investors are set to be given a healthy dose of reality this week, which could help them firm up their outlooks for the global economy. Until there is.

The hotly anticipated US retail sales figures were released earlier this afternoon and they didn't disappoint with more records broken. The headline number topped...