Gold is seeing a nice move today, what's up? Gold was back above the key $1800 psychological level and within touching distance of its 200-day SMA. Despite real yields rising, the weaker dollar propped up the yellow metal. The outcome of Jackson Hole on Friday could lead to some volatility for gold. If the market thinks the taper timeline will be delayed as a result of softer recent economic data (today’s PMI data was weak) and delta variant flare ups then gold could see a bid. 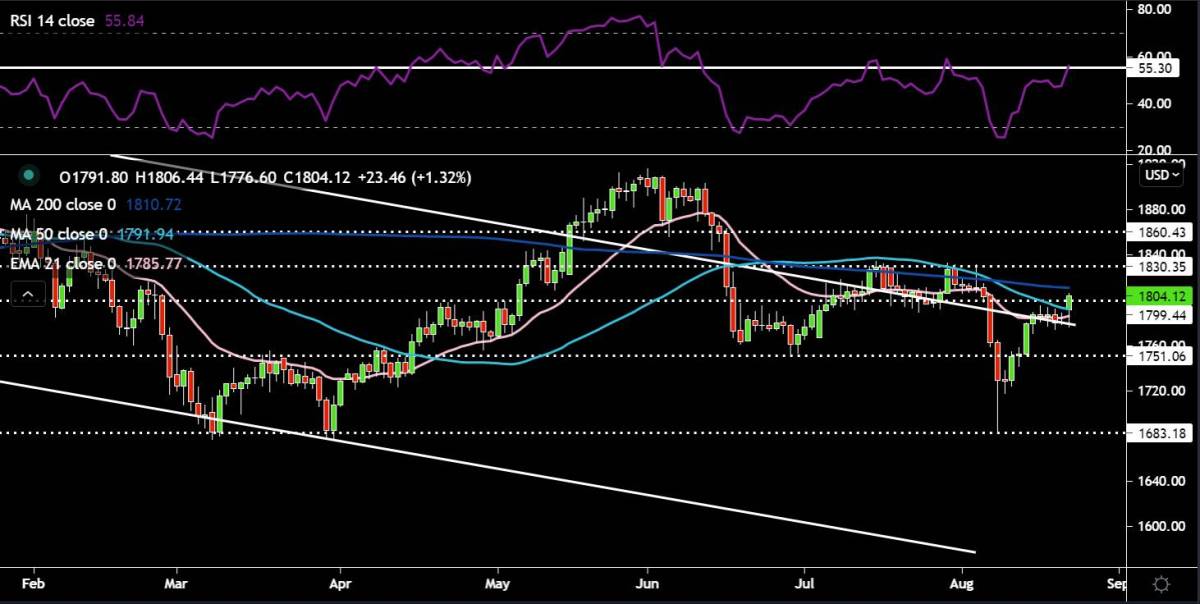 Or alternatively, the FOMC are happy with the progress seen so far particularly in the labour market and feel the high level of vaccinations should blunt the delta flare up, allowing them to be more forthright with clues surrounding an imminent taper timeline. September would be seen as fairly hawkish. The event obviously creates two-way price risks providing opportunities for traders.

Over the medium to longer term I feel there are a number of factors working against gold. Yield moves are skewed to the upside given the Fed and an economy which will return to normality. I do think 10-year yields are mispriced some what due to a variety of technical factors. Additionally, the dollar is in a very advantageous position as it benefits when risk sentiment takes a nosedive or when the Fed moves closer to tapering on strong economic data. It’s not called king dollar for nothing.

Gold has bounced off the upper trend line of its descending channel and 21-day EMA. The 50-day SMA hurdle has been dealt with. However, the 50-day SMA is still below the 200-day SMA, after the death cross in early August. The RSI is peaking its head above the 55 mark (price rallies have stalled previously here). Targets wise, $1750 support would be my first initial downside area of interest and on the upside the 200-day SMA and double top horizontal resistance around $1830. I still like a short the rallies approach, but one will need to remain flexible in the short term, especially if we see a delay in tapering.

Futures in the United States and in Europe are trading sharply lower as investors worry about the domino effect of Evergrande’s massive plunge on the Chinese property market..

Oil prices climbed to higher grounds in the most recent daily sessions adding further to its upward momentum formed so far in September. The Oil market is running...

Global markets closed last week on the back foot, and no significant positive factors emerged in Asian trading, increasing the flight to safety. The Hang Seng lost...

US Retail sales and other data has supported Dollar

The US Retail sales notably exceeded expectations, adding 0.7% in August vs an expected 0.7% decline. The increase to August last year is an impressive 14.9%...

Geopolitics Fire Up Up and Cryptos Are Booming

Futures in the United States and Europe are trading lower today as investors are worried about the new security agreement between the U.S., the U.K. and Australia...

European markets flat at the open this morning as UK inflation surged to a record high in August and Chinese economic data was soft. China’s retail sales fell to...

Trade CFDs on the hottest stocks in the market!