US Q1 earnings preview - our guide to movement in equities

We head to US Q1 corporate earnings with inflation, geopolitics and a central bank hiking cycle still very much front of mind. With the market considering how much further corporates can absorb price pressures, amid an already worrying decline in consumer confidence. 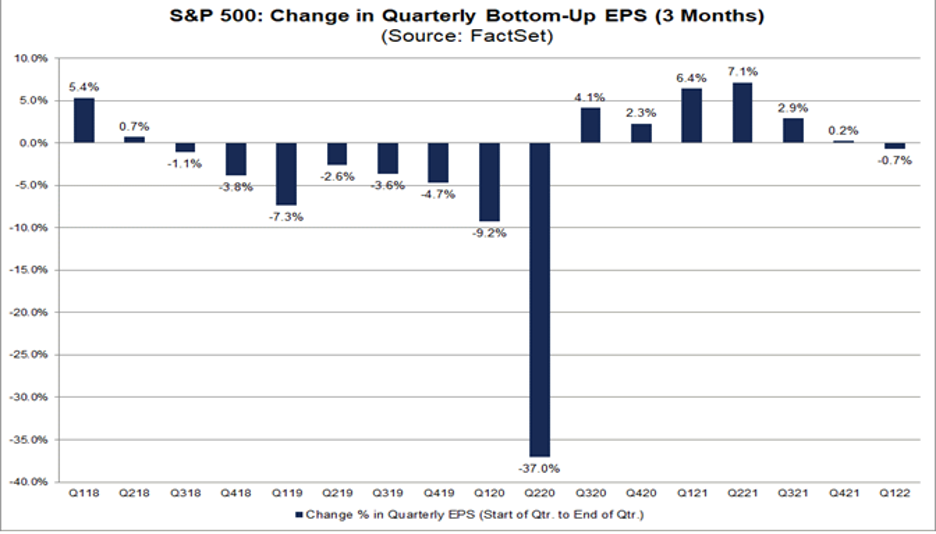 We see this as classic mid to early late business cycle investing behaviour, but as we’ve seen in the recent bounce in US equity indices from mid-March, there's still a strong appetite to be invested – funds are well hedged and rotating into specific areas of the market that typically outperform at this part of the business cycle.

CFD traders eye movement above all

In the CFD space, trader flow will be less influenced by factor or style investing and are far more directed at companies making headlines or that are seen as an expression of a major market theme – for example, trading Alibaba or Baidu on potential regulatory changes for US-listed Chinese stocks. Trading Twitter as Elon Musk becomes the biggest shareholder and we question if there's more to come, or going short a name like DR Horton (home builder) because US 30-year mortgage rates are moving higher at an explosive clip and construction costs are on the rise.

Trading news often becomes a momentum trade as these names typically exert some of the strongest rate of change (ROC) in price, which is compelling to short-term traders who can trade long and short.

When we consider movement, tech and some areas of discretionary are generally where we see the flow of trader capital – largely because they are higher beta and move more aggressively relative to the S&P 500 and other areas of the market, like utilities or staples. Traders want the highest volatility names and that can have the propensity to trend - Names like Nvidia, Tesla, Robinhood, GameStop, AMC, Alibaba, Facebook, and Apple for example.

The consideration that makes trading share CFDs over earnings compelling is that as we see the reality of the current operating landscape marked against current expectations, and with the vision of CEOs on the outlook portrayed, we can often get outsized moves. What’s more, while the market works efficiently to discount news in real-time, the initial move can continue for days especially if the market is surprised and the stock has had a big rally or sell-off into earnings and sentiment is at extremes. Movement is therefore key and not just for swing traders but also for day traders and scalpers.

We’ve put together a schedule of the core stocks Pepperstone clients typically trade above others – we’ve looked at historical moves on the day of reporting to offer a sense of how volatile it can be over earnings. We’ve then looked at options pricing to see the implied move (higher or lower) on the day of earnings – we can see names like Twitter, Facebook, and Netflix have particularly high expected movement and should get attention from clients.

Short interest is another catalyst, potentially promoting outsized moves if a large percentage of the free float has been sold short and we see a genuinely positive shock. We also look at the earnings pedigree and its propensity to beat on consensus sales. Of course, this is just one gauge and importantly we look forward in markets and often it’s the outlook that's far more influential to the share price reaction.

Whatever your strategy, whatever your directional view or timeframe, there's a number of reasons to look at share CFDs with Pepperstone.