Share buybacks are essentially when a company buys outstanding shares of its stock with its cash or borrowed funds. The buyback reduces the total number of outstanding shares that are available to the public and boosts its share price since there is less supply. It is often associated with a positive indicator and signals investor confidence in cash flow and revenue growth which often leads to stronger returns. Share buybacks have become a dominant theme of corporate payouts in the U.S.

More recently, US companies have been rushing to repurchase large volumes of shares to take advantage of stock market volatility and more importantly reassure investors as economic growth slows.  There has been a record number of share buybacks worth $319 billion according to Goldman Sachs data, and a rising number of companies are taking advantage of depressed share prices.

Open a live account with MultiBank Group today and begin trading the top companies who have or are doing share buy-backs.

There have been numerous reports that have focused on firms’ decisions to implement share buybacks. However, here are some of the most cited reports according to Hsieh and Wang (2009) are the following:

There are various reasons why companies pursue buybacks, ranging from ownership structure, undervaluation, and boosting financial ratios. According to S&P Global, some interesting findings conclude that over a long-term investment period, share buyback portfolios generated positive excess return over their benchmark index. A good example is when looking at the share buyback index, which tracks the performance of the top 100 stocks that have the highest buyback ratios in the S&P 500. 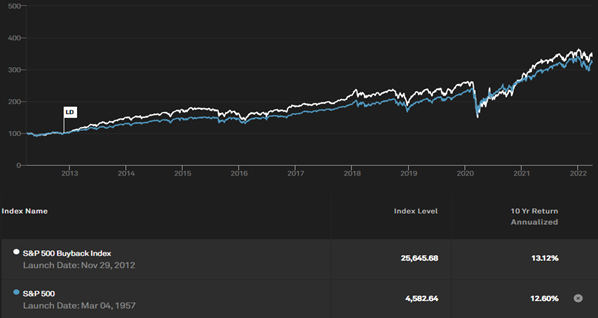 Despite the strong evidence and positive relationship between share buybacks and price performance, there are some important questions to consider before investing, such as the following:

Does the company have strong fundamentals? Sometimes the company gives an artificial lift through its share buyback to cover its financial problems.
Short-term bump or long-term goals? Buybacks usually result in short-term price lifts, these prices may appear attractive at first to investors but may be short-lived when the market realizes that the company has not increased its actual value.