The supply of soybeans is rising while demand is fragile

After two straight sessions of falling prices, soybeans prompt-month futures contract traded on the Chicago Board of Trade (CBoT) went up 0.8% on Friday and settled at 14.28 USD per bushel. Still, the contract was down 1.9% w-o-w as surging coronavirus cases in China dashed hopes of a swift reopening of the economy. Furthermore, soybeans price declined due to the spillover pressure from other commodities - most notably, crude oil. According to OctaFX experts, soybeans often follow the trends in the crude oil market due to their role as feedstock for ethanol and biodiesel production. Even the recent weakness in the U.S. Dollar Index (DXY) failed to provide additional support for greenback-priced commodities (by making them less expensive for importers) as worries about demand in China, the world largest importer of soybeans, outweighed other bullish factors.

The United States, Brazil, and China are the three countries that drive the soybeans market. The United States is both the world’s second-largest consumer and the world’s second-largest producer of soybeans. China is the largest consumer of the crop, accounting for no less than a third of the total world soybean demand, while Brazil is the world's largest supplier.

In its latest Oil Crops Outlook, the U.S. Department of Agriculture (USDA) has revised its soybean crush outlook for Brazil by 0.3 million metric tons and expects it to reach a record 51.8 million metric tons. According to Brazil’s National Association of Cereal Exporters (Anec), the country exported some 3.56 million tons of soybeans last month compared to 2.98 million tons in October2021. Similarly, the World Agricultural Outlook Board (WAOB), in its recent World Agricultural Supply and Demand Estimates (WASDE) report, painted a generally upbeat picture of the U.S. soybean production. WAOB forecasts production to increase to 4.35 billion bushels due to higher yields in Iowa, Missouri, Nebraska, and North Dakota. With exports unchanged, the soybean ending reserves outlook was raised from 20 million to 220 million bushels. The U.S. season-average soybean price for 2022–2023 is forecast to average 14.00 USD per bushel, unchanged from last month. 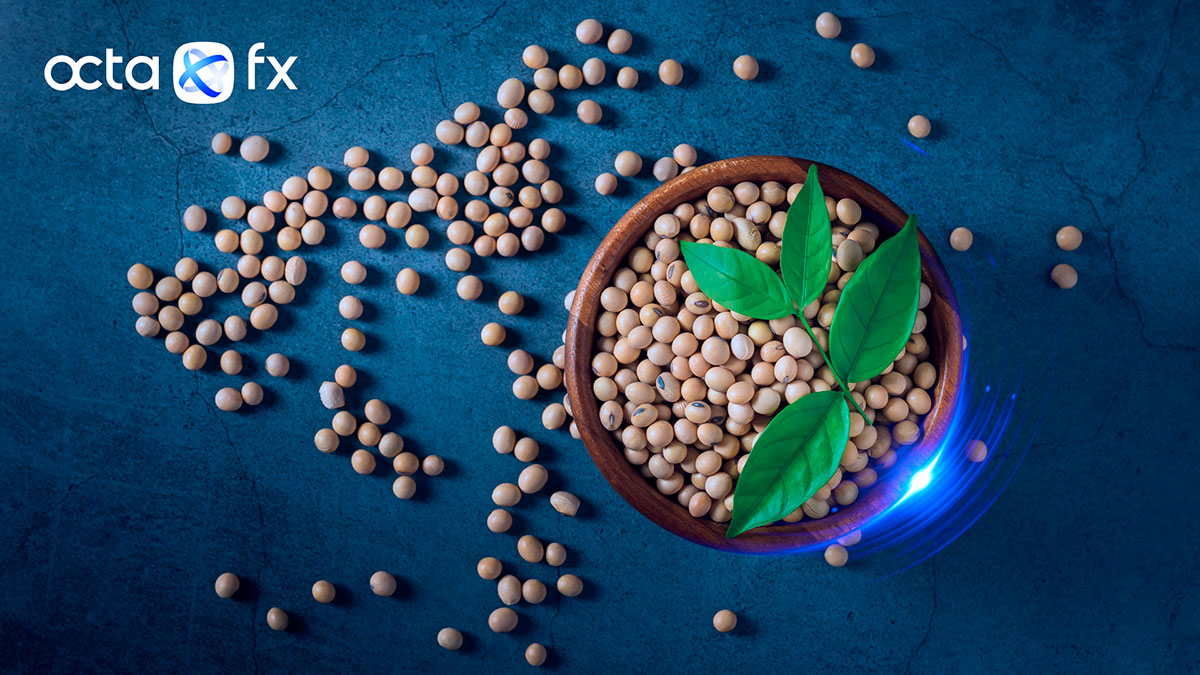 However, booming soybean production in the U.S. and Brazil is partly offset by negative supply issues in Argentina, where a severe lack of rainfall made field work difficult and forced farmers to delay soy planting. In addition, the shaky "grain deal" continues to remain a source of persistent uncertainty putting upward pressure on prices of many soft commodities, including soybeans. Still, the supply picture looks relatively solid, OctaFX analysts point out. For example, the USDA report from November 14 showed the U.S. soybean harvest at 96% complete, just behind the average expert estimate of 97% but ahead of the five-year average of 91% and up from 94% a week ago. Furthermore, reports surfaced that Argentina was considering reinstating a special exchange rate for soybean producers in a bid to boost exports, as the country needs grain export dollars to replenish its reserves.

When it comes to demand, however, the situation is not so bright. China remains the key market for soybeans, and any signs of slowing demand there has an immediate negative impact on prices. According to OctaFx experts, a massive 16% drop in soybeans prices in mid-August in just three days was very much China-driven. On 15 August, the People's Bank of China (PBOC) unexpectedly cut key interest rates and withdrew some cash from the banking system, attempting to revive credit demand to support the COVID-hit economy. Such a step raised fresh concerns about an economic contraction in China, which resulted in a sharp drop in commodity prices.

As the largest buyer of U.S. soybeans, China plays a key role in the market. Right now, the situation is mixed. Although China is facing a rise in COVID-19 cases, the authorities have sought to apply more targeted measures, as opposed to nationwide lockdowns. Therefore, OctaFX expert team expects a surge in COVID-19 cases to lead to only minor locally-based lockdowns and mostly in the short term, as new widespread curbs will have a negative impact on the economy and will fuel public frustration and discontent.

Still, the market is forward-looking and the price for soybeans has been affected by rising fears of lockdowns that could curb demand for commodities. It is unclear if China can remain the source of bullish support for agricultural commodities. Indeed, the most recent data indicates that imports are slowing down. According to the General Administration of Customs, China's imports of soybeans fell 19% y-o-y in October to 4.14 million tonnes, the lowest for any month since 2014. Part of the reason for such a sharp drop in imports is very low crash margins inside China. However, OctaFx analysts say that China still needs to rebuild its soybeans stockpiles, so imports will probably rise in November and December.

Technically, 14.00 USD per bushel offers a strong support level, so soybeans will likely trade around this level in the short term. If the soybeans price drops below 14.00 USD per bushel, the bears will almost certainly attempt to retest the 13.80 USD price zone. Alternatively, a rise above 14.40 USD will open the way towards 14.70 USD and possibly 15.00 USD.

OctaFX is a global broker providing online trading services worldwide since 2011. It offers commission-free access to financial markets and a variety of services already utilised by clients from 150 countries who have opened more than 12 million trading accounts. The company is involved in a comprehensive network of charity and humanitarian initiatives, including the improvement of educational infrastructure and short-notice relief projects supporting local communities and small to medium enterprises.

Is Visa the reliably volatile stock every trader is looking for?

Visa Inc, headquartered in the US, is one of the world's most valuable companies. Visa's global network processes over 100 billion transactions per year...