The time has arrived for international broker OctaFX’s annual retrospective of events impacting the world economy - compiled towards the year’s end. The year 2022 has been all-around eventful and fateful. Let’s give due diligence to the 10 most important events that affected the financial markets. The year 2022 has been dominated by two major issues: the extreme rise of geopolitical tensions and record-high inflation in most industrialised economies. Both domains are intertwined and can be basically split up into ten key events.

They are listed in order of importance and priority, although all of them have been strikingly crucial for the unfolding of 2022’s economic, financial and political narratives and disruptions - Forex being, of course, just one of them.

More like a chain of events rather than one single event, the U.S. interest rate hikes pace has been faster than at any time in recent history—raising them by as much as 375 basis points in just 11 months (from <0.25% in January to 4.50% in December. In turn, higher borrowing costs have damaged the appeal of non-yielding assets such as gold and crypto (at one point, XAUUSD was down 22% from y-t-d high to y-t-d low; BTCUSD was down 67%) and put a downward pressure on traditional risky assets such as stock indices (for example, S&P 500 is down more than 15% y-t-d). In addition, the risk-off mentality has spurred the U.S. dollar, particularly against the weakest currencies that lack monetary support. For example, at one point, USDJPY was up as much as 30% from the y-t-d low to the y-t-d high. 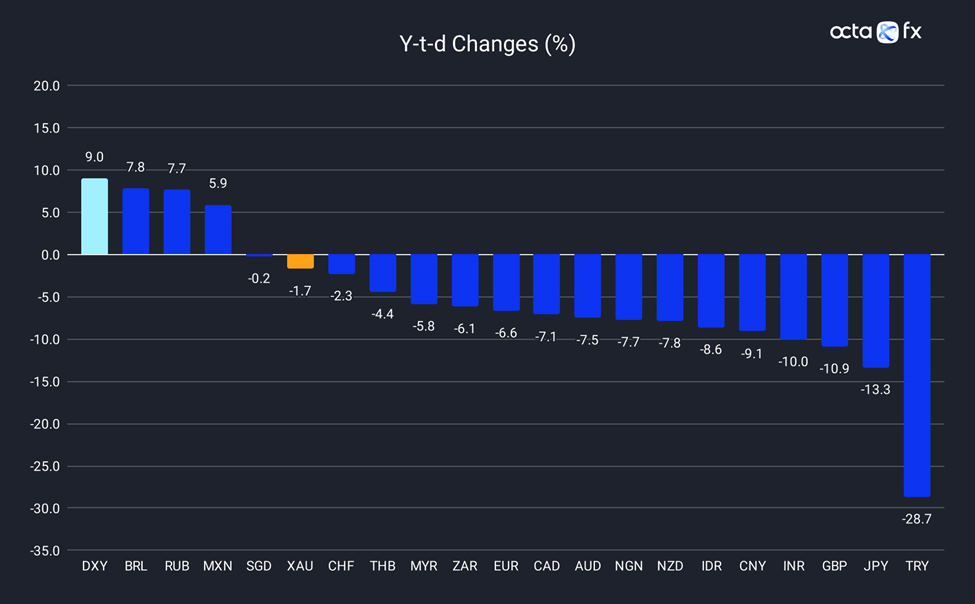 Record-high inflation in the U.S. and beyond

One of the many reasons for inflation was heavy supply chain disruptions, accompanied by a lingering effect of fiscal stimulus. In addition, geopolitical tensions caused another surge in inflation by increasing the uncertainty around energy and agricultural suppliers.

With gas and electricity bills nearly doubled in all EU capitals compared to a year before, the problem remains serious. Almost all other energy products and the shares of utility companies in Europe were affected, and a mid to long-term solution is far from being found. More on that later.

Conflict in Eastern Europe in 2022, a new, uncertain era in international relations has begun. Navigating these collisions as they manifest on the financial market has become more and more an investor’s occupational risk. Global commodity prices have not remained untouched, boosting inflation and forcing the European Union and the continent as a whole to reexamine its energy policies. The latter sprang directly out of the unparalleled series of sanctions the EU imposed on Russia. 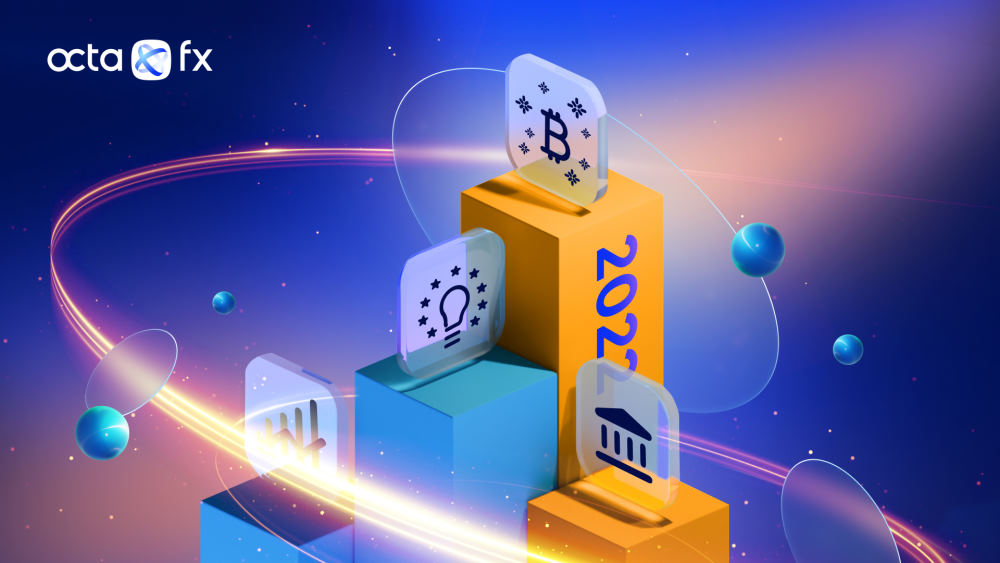 Long before the FTX fallout ever appeared on the horizon, the bear was already wandering around, forcing the crypto market trend downwards, with bitcoin at times falling by a whopping over 70% since December 2021. The cryptocurrency market was just a marker for an overall motto of ‘risk being out of fashion’ in the general investors’ sphere, as falling equity valuations have illustrated for a prolonged period of time. Then, in November, came the FTX collapse, giving the financial trends another main nail in the coffin of institutional trustworthiness. Around 8–10 billion U.S. dollars worth of funds have disappeared from the platform—one billion belonging to its retail community—lost almost overnight. Approximately a million people have lost their money. Not even FTX’s billionaire investors were spared: over thirty of them reported considerable financial losses.

With the geopolitical tensions in Eastern Europe already in full swing, an August crisis around Taiwan was on the brink of turning into an active warzone, as well - with the U.S. and China most probably turning out to be direct conflict parties. This has been circumvented. Not thanks to the speaker of the U.S. House of Representatives Nancy Pelosi who visited Taipei despite clear warnings of Bejing to abstain from such a visit. But sanctions against China’s technological companies were administered by the U.S. nonetheless, with China going on military and economic high alert.

Towards the year’s end, news broke that China and Saudi Arabia had agreed to trade oil in Chinese yuan, moving Bejing’s national currency further into world reserve status. China is a founding BRICS group member, and Riyadh expressed an intention to join the network on numerous occasions. Russia, in an effort to combat sanctions, chose to only offer its energy exports to unfriendly nations in exchange for rubles.

At the same time, U.S. President Joe Biden’s administration passes legislation to protect itself from inflation and to combat it by basically creating unprecedented incentives for European industry to migrate to North America. Especially the advantageous U.S. energy prices offered are causing the industry exodus of the old continent. A move that caused widespread perplexity among the EU’s leaders—France’s Emmanuel Macron and Germany’s Olaf Schulz being at the forefront of this European confusion.

An outright news conflict has been waged on whether the Western sanctions on Russia have shipped the desired effect. But one thing during the course of a total of nine EU sanctions packages became apparent: it had a more negative impact on its own economies than much of the European elite had previously anticipated. What first started to look like a stern and decisive blow for Russia from the EU - with Russian stocks plummeting by 33% and the ruble going down to 140 currency units per U.S. dollar in March - soon turned out to have an economic boomerang effect. Russia’s economy and its national currency managed to stabilise and the sanctions on its energy have been in a constant process of adaptation - like strengthening and expanding energy partnerships with China, Turkey, and India further in non-U.S. dollar trade deals.

On top of the EU natural gas price cap to be introduced on Russian exports, the U.S.-based Intercontinental Exchange (ICE) has threatened to leave Europe if Brussels were to stick with a said price cap. A stable natural gas supply from Russia is now a thing of the past either way after the explosion of the Nord Stream II natural gas pipeline infrastructure in September.

After Russia’s gold and foreign exchange reserves were frozen in the aftermath of the February invasion, investing in U.S. Treasuries looks less safe than previously. Therefore, central banks across the board were and still are looking for alternatives. Also, neither China nor Japan is buying that many U.S. bonds anymore, which is a trend reversal in global financial dynamics, as well.

The November midterm elections brought forth a divided government, suggesting meagre expectations of structural reforms to address long-term problems or provide effective fiscal support should the economy weaken further. In the immediate aftermath, fears were rampant that the forked election results might impact the U.S. dollar’s rally that has been going on because of the 2022 interest rate hikes until that moment. Fears that proved investors right just a few more days along the line, since the greenback retreated from multi-decade highs occurring just mere weeks prior.

An honorary mention should be the dramatic stand-off between the OPEC+ group and the U.S. when the crude oil price reached 100 U.S. dollars per barrel. The ‘NOPEC bill’ by the USA served as a disciplining response to OPEC+'s cutting oil production by two million barrels a day.

Crude oil was rising because U.S. shale production has plateaued, while spare capacity in OPEC countries has reached its limits. In an attempt to bring down soaring petroleum prices, the U.S. started to release crude oil from its Strategic Petroleum Reserve (SPR). Total releases from SPR this year totalled more than 211 million barrels, putting the inventories at their lowest levels since 1984.

That is not to say there were no other important events for the Forex world in 2022: but if distilled to just a list of ten, these are the OctaFX experts’ picks for the past year.

This preview of weekly data looks at USOIL and XAUUSD, where both commodities seem to pause their aggressive bullish rallies following the thinning trade volumes of the Chinese New Year...

Are you thinking about investing in gold in 2023? With the increasing financial uncertainty around the world, many traders are looking to gold as a safe-haven asset...

Stocks in a Rally!

USDIndex settled at 101.50, Wall Street rallied on the back of tech amid ongoing hopes for a downshift in Fed rate hikes amid a potential moderation in inflation this week...

USD Index remains under pressure near 102.00

The index kept the consolidation well in place near 102.00. The resumption of the risk-on mood weighs on the dollar. Flash Manufacturing/Services PMIs come next in the US docket...

USD Index remains under pressure below the 102.00 mark

The US Dollar started the new week under modest bearish pressure and the US Dollar Index declined below 102.00 during the Asian trading hours on Monday...

Ford shares and trucks are getting traction in 2023