Ford shares and trucks are getting traction in 2023

In just two weeks, Ford shares (F) soared from $10.86 (USD) to $13.42. Traders are wondering what’s causing the surge and whether it will continue throughout 2023. Among investors and traders, there are two things everyone understands about the automotive industry: trucks drive massive profits for manufacturers, and electric vehicles are the future. Ford's electric vehicle sales are surging, but the brand's future success may depend on one car.

Electric and hybrid cars are growing in popularity the world over, but would the working utility driver see the benefits over the cost? The Basic F-150 starts at $33,695, so when the price of the Ford F-150 Lightning was revealed to be only $8000 more, truck drivers took notice.

If Ford Motor Company's F-150 Lightning’s current sales are an indication, electric trucks are set to become the future of utility vehicles, and Ford is leading the way.

Maybe not! The F-150 Lightning electric pickup added to its trophy shelf the 2023 MotorTrend Truck of the Year award, and it was the first electric truck to win by a unanimous vote from the judges. In a MotorTrend vote, electric vehicles have only been unanimously voted twice before, and nobody expected that with a truck.

In the eyes of its supporters, the F-150 Lightning is Ford's best truck ever and a historic achievement in the history of American transportation. Time will tell if the truck is worthy of such high praise, but for now it’s checking all the boxes, and the stock has been reacting bullish since the beginning of the year. 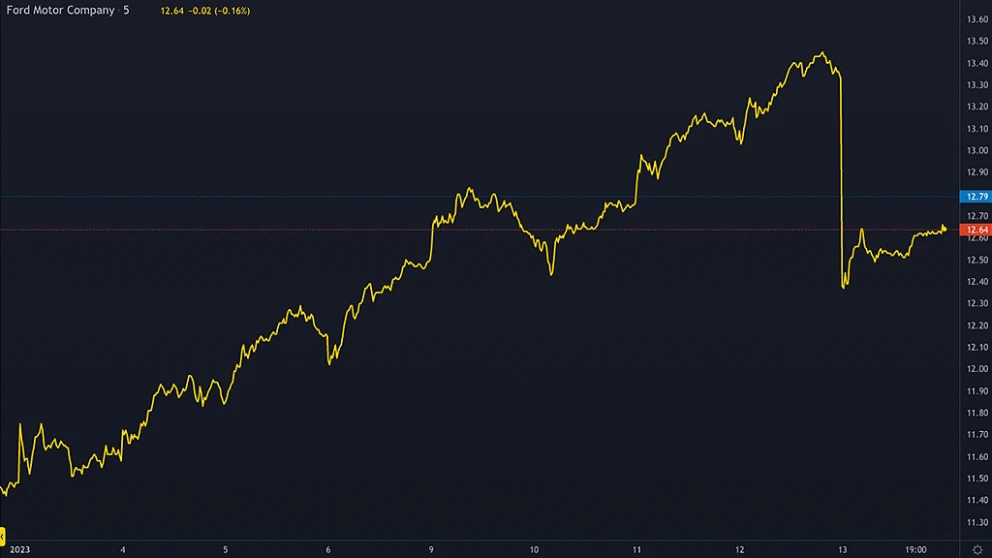 Sales say everything about the F-150 Lightning

Since its launch, Ford's F-150 Lightning has been the best-selling electric truck in America throughout November and December, and its sales are growing twice as fast as the industry as a whole. As a result, Ford's electric vehicle sales jumped 126% in 2022 compared to the previous year, and production soared 223% in December. Ford's F-150 Lightning is off to a great start, but it may hit speed bumps in the near future, and that might have a weighty effect on stocks, and not many traders are aware of it.

Production pushes the breaks on expansion

When a product trends, producers often find themselves shorthanded and under-equipped to handle the order volume. Clearly, Ford underestimated the global interest in the F-150 Lightning, and they are struggling to keep in step. Ford is building Lightnings around the clock, but it wants to boost production capacity to 150,000 units by the end of Q2. A tall order that seems unrealistic, given what’s happening in the world.

Ford hasn’t exactly placed all its eggs in one basket, but it is somewhat dependent on one truck type for healthy shareholder reports and revenue. This might sound strange, given that Ford produces 40+ types of vehicles worldwide, but keep in mind, the “OG” F-150 has consistently generated around 90% of Ford's global profits for years.

We saw it with Tesla. An overworked production line led to late orders and quality issues. Is Ford about to make the same mistake? If that’s true, the bullish trend will be short-lived, and a correction is on the horizon.

Ford has made an electric version of its best selling vehicle and truck drivers love it. The world is ready to adopt hybrid and EV alternatives. The Lightning hype helped rocket F prices from a 12-year low to $13.43. And then, on January 12, somebody dumped a large volume of stock in a single day, pushing prices back to $12.64, creating a buyer opportunity.

Both fundamentally and technically, Ford stocks are trending in a buyers market with both long-term and short-term possibilities, but supply and demand in 2023 will be the deciding factor for the company’s success. If recession fears diminish sales, right after Ford sets up an infrastructure for increased production, F charts will get stormy, so trade under the assumption that a trend change could happen any time.

Keep up with the latest news surrounding Ford's F-150 Lightning. Vehicle recalls and sales drops could create negative sentiment, and any gains could be erased within a day.

Central Banks Are In The Spotlight

Central banks will be in focus this week with meetings of the U.S. Federal Reserve (Fed), European Central Bank (ECB), and Bank of England (BoE), each expected to keep raising rates...

This preview of weekly data looks at USOIL and XAUUSD, where both commodities seem to pause their aggressive bullish rallies following the thinning trade volumes of the Chinese New Year...

USD Index adds to recent gains near 102.00 ahead of key US data

The index extends the optimism and retargets 102.00. US yields pick up extra pace along the curve on Friday. Final Consumer Sentiment, PCE, housing data next on tap...

Are you thinking about investing in gold in 2023? With the increasing financial uncertainty around the world, many traders are looking to gold as a safe-haven asset...

Stocks in a Rally!

USDIndex settled at 101.50, Wall Street rallied on the back of tech amid ongoing hopes for a downshift in Fed rate hikes amid a potential moderation in inflation this week...