Bulls on the lookout for new upside drivers

The euro notched up gains against the dollar, up 0.52% at 1.1931 on Tuesday, August 18. The EURUSD pair started to move higher in Asian trading and climbed as high as 1.1966. The pair shot up 60 bps after acting chairman of the Council of Economic Advisers, Tyler B. Goodspeed, said President Trump would continue to push for his economic stimulus bill. The US president refuses to make concessions to the Democrats and the ensuing gridlock has exerted an adverse impact on the fixed income market.

The US dollar index fell 0.58% to 92.32 after earlier touching 92.13, the lowest mark since May 2018. Meanwhile, the rally in tech stocks provided a positive backdrop for investors and propelled the S&P 500 and Nasdaq to new all-time highs.

Meanwhile, traders remained focused on Sino-US relations. The Trump administration on Monday announced a further tightening of measures aimed at restricting Huawei’s access to commercially available chips. Trump has previously warned that he is ready to prohibit other Chinese companies from operating in America by blacklisting them. Notably, Alibaba Group Holding Ltd. could be next in line.

After having peaked at 1.1966, the single currency later fell back to 1.1918. We attribute weakness in the euro to a $41 decline in the gold price to $1,976. The dollar, having lost its appeal, has made gold more expensive. At the same time, market participants were wide awake and quickly took profits on long positions. Buyers pared losses in gold, thus allowing EURUSD to stabilize at 1.1940. 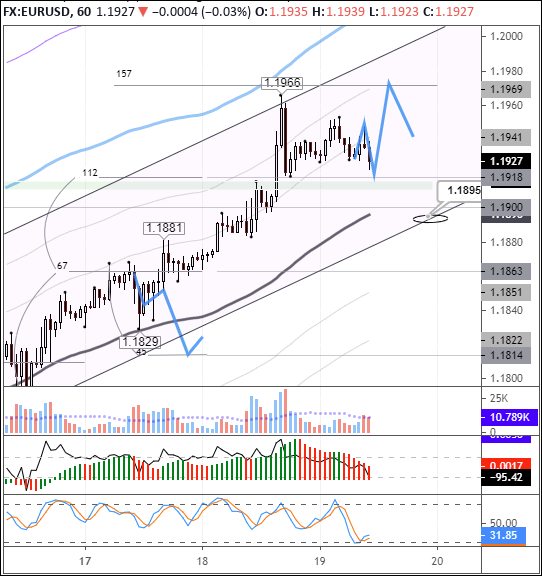 At press time, the euro was trading at 1.1924, while major currencies were hovering in positive territory. Euro crosses are showing mixed dynamics. Traders are reluctant to buy into the dollar amid concerns about the growth prospects of the US economy as well as gridlock surrounding the new fiscal relief bill.

Today market participants will be focused on minutes from the Fed’s July meeting. The minutes should flag the regulator’s position on yield curve control. In addition, July inflation data is due out of the Eurozone.

Support for the EURUSD pair is at 1.1915. Gold is trading at $1,984, right on the trendline and balance line. A current assessment of the dynamics of major currencies shows signs of a downward correction. Yesterday the price bounced off the upper line of an ascending channel. In all likelihood, the bulls will once again attempt to muster a rally to 1.1965. If this resistance level is not overcome, we should expect a reversal at 1.1915 and a pullback to 1.1895.