EURUSD: The Bulls are not giving up

The price of Euro on the D1 time-frame was range-bound until it made a lower bottom on 25 September. It seemed that the supply pressure, as many traders expected,  was finally strong enough to break out of the range. However, this proved to be short-lived and became a bears trap as the bulls pushed the Euro back into the range again.

On 15 October, a higher bottom was formed at 1.16885 and the bulls showed their power again as the market shot through the 15 and 34 Simple Moving Averages and the Momentum Oscillator continued higher above the zero baseline into positive terrain. A Three White Soldier Candle pattern confirmed the upward momentum. 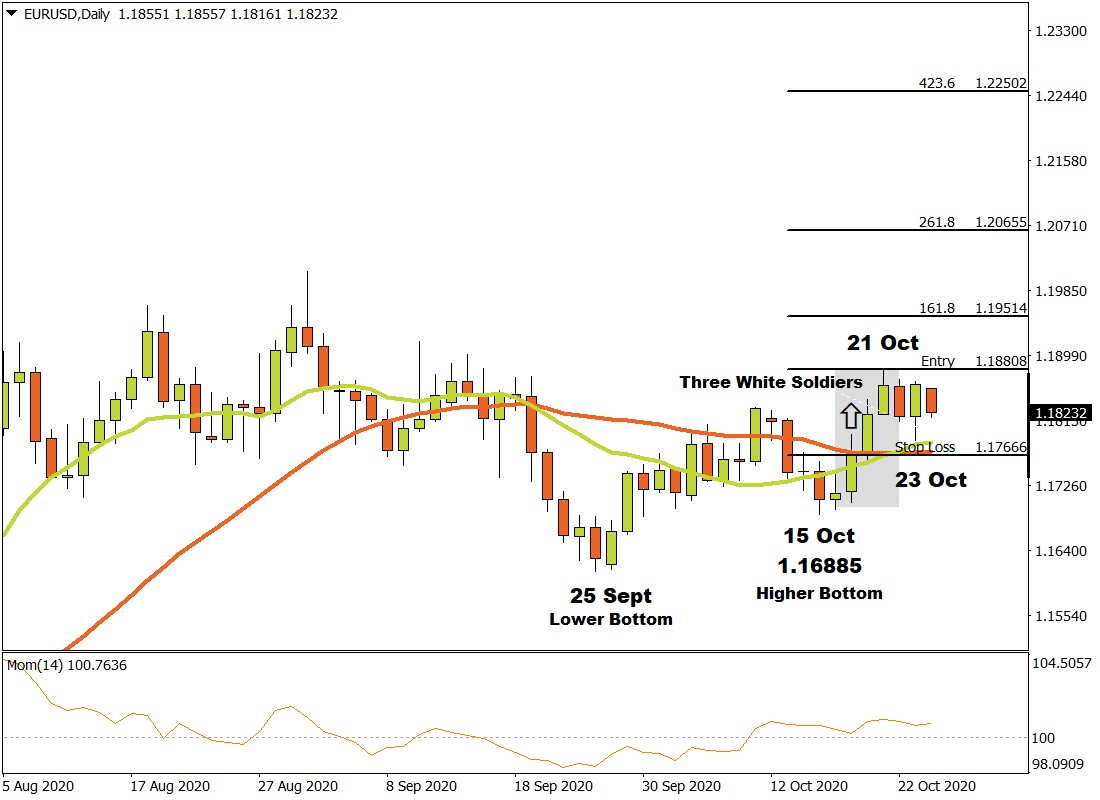 A possible critical resistance level formed when a higher top was recorded on 21 October at 1.18808,  indicating that the bulls might be strong enough to start a new uptrend. Currently the bears are still trying hard to bring the Euro to lower levels.

If the Euro breaks through the previous higher top and critical resistance level at 1.18808, then three possible price targets may be calculated from there. Applying the Fibonacci tool to the top of the resistance level at 1.18808 and dragging it to a possible support level near the 34 Simple Moving Average at 1.17666, the following targets could be considered. The first target could be estimated at 1.19514 (161 %). The second price target might be considered at 1.20655 (261.8%) and the third and final target may be projected at 1.22502 (423.6%).

If the 1.17666 support level is broken, the anticipated price targets are annulled. As long as the price continues making higher tops and bottoms and demand overcomes supply, the outlook for the EURUSD currency pair on the Daily time-frame will remain bullish.

The EURUSD notched up robust gains on Tuesday, December 1, with the single currency gaining 1.21% to 1.2067 against the dollar. The price action started...

If the decline in EURUSD stalls at 1.1955, market participants would be advised to look at the crosses. If they are supportive, buyers will attempt to muster...

The Euro is starting the trading week on a risk-on note, gaining against safe haven currencies such as the US Dollar, Japanese Yen, and Swiss Franc. However, the shared...

EURUSD recovered to the 67-degree line (1.1827), which has been a strong resistance level during recent corrections. Despite the rally in the EURGBP cross, buyers...

Research on the Pfizer vaccine has shown an efficacy rate above 90% in treating coronavirus infections. No serious safety issues were observed during...

EURUSD traded marginally lower on Monday, November 2, with the single currency ticking down 0.03% against the US dollar to close at 1.1641. The intraday low...

Given the tense situation surrounding the pandemic and the introduction of lockdowns until December, the euro runs the risk of further losses. On the daily TF...