The Euro on the H4 time frame was in a bearish mode until 11 August, when a lower bottom was reached at 1.17061. Bulls found the price attractive and demand started overcoming supply. A closer look at the Momentum Oscillator revealed a positive divergence between point a and b, compared to the price at 1.17423 and 1.17098. This could have alerted technical traders that a potential momentum change was on the cards.

After the lower bottom at 1.17061, the Euro broke through both the 15 and 34 Simple Moving Averages and the Momentum Oscillator crossed the zero baseline into bullish territory, confirming that the bulls were on the march again. A higher top and possible critical resistance level formed on 13 August at 1.18048 and bears are currently trying to bring the price lower. 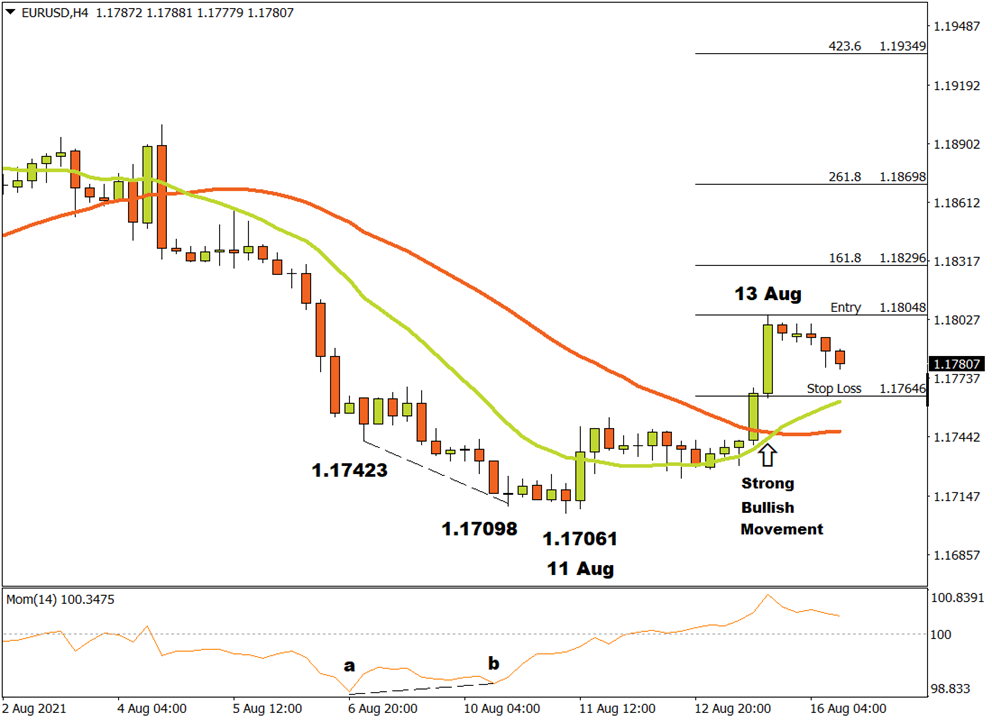 If the Euro breaks through the critical resistance level at 1.18048, then three possible price targets may be calculated from there. Applying the Fibonacci tool to the top of the resistance level at 1.18048 and dragging it to the bottom of a possible support area near the 15 Simple Moving Average at 1.17646, the following targets can be considered. The first target may be projected at 1.18296 (161%) and the second price target can be likely at 1.18698 (261.8%). The third and final target may be expected at 1.19349 (423.6%) if the uptrend continues making higher top and bottoms.

If the 1.17646 support level is reached, the bullish scenario can be disregarded and the situation needs to be re-assessed. As long as the market maintains a positive sentiment and demand overwhelms supply, the outlook for the Euro on the H4 time frame will remain bullish.

The Euro is holding the fort

EURUSD remains strong in anticipation of the US statistics. The major currency pair is trying to keep its positive momentum. The current quote for the instrument is 1.1604...

The euro rose on Wednesday as the dollar fell after the publication of U.S. inflation data. U.S. consumer prices rose in September as Americans paid more for food...

Have the bulls got what it takes to push Euro to higher ground?

The Euro on the H4 time frame was in a bearish trend until 6 October, when a lower bottom was reached at 1.15292. Bulls found the price attractive there and demand...

The Euro managed to strengthen

EURUSD is rising a little bit on Monday afternoon; investors are hoping for a calm trading session. Early in another October week, the major currency pair is slowly growing...

Early in a week, the major currency pair is growing; the asset is trading at 1.1585 and may gain even more weight. The greenback dropped a bit after the USA reported...

EURUSD is moving below Ichimoku Cloud, thus indicating a descending tendency. The markets could indicate that the price may test Tenkan-Sen and Kijun-Sen...