Surely, many of you have heard the phrase "Christmas rally" or "New Year's rally." This usually refers to the US stock market, characterizing the seasonal powerful trend of stock indexes at the end of the year.

National currencies and US dollar also do not stand aside, responding to the global rise in the stock market. How the rally is going on Forex, which currency pairs most clearly respond to New Year’s trends, past statistics - all this is in our article about this trading phenomenon.

Shares of the thirty US companies of the oldest Dow Jones index demonstrate an alike upward progress for almost two centuries in a row with an 80% probability. The other stock indices demonstrate similar behaviour in 65-75% of cases, being influenced by various factors, mostly economic and political.

The basis for stock growth includes a range of subjective reasons. This growth can be divided into stages of the year’s end. Firstly, Christmas sales evidently raise consumer demand economic indicators and accelerate inflation in some degree. Speculators are trying to form trading positions in advance in order to take profits on impulse growth in early December upon the national economic statistics’ release.

If market indicators significantly exceed analysts' expectations, and on the other hand the reports of major companies for the previous three quarters displayed growth in profits, then stock indices are to go to the second stage of growth. Investors actively buy shares based on positive annual reports that is released immediately after the long New Year holidays.

As observed above, US exchanges, both stock and out-of-the-counter, are most likely to show a Christmas rally. The stock market is straight-linked to the US dollar, and the growth of investors’ appetite for risk and, as a result, for the purchase of shares in the United States stock exchanges leads to dollar’s strengthening in all the traded currency pairs.

This signifies that with a high degree of likeliness at the end of November and during the whole December traders will observe a weakening of other national currencies. There is also a strong probability that they will witness a “flat” if the local stock market grows more intensively than US stock indices.

The dollar’s trend strength in each specific currency pair will be determined by:

The Fed rate, like interest rates in other developed countries, has dropped almost to zero during the last 10 years. The emerging growth was again replaced by a softening policy, which led to significant changes in the trends of seasonal currencies’ charts.

In the so called “seasonality tool”, a trader can observe the average exchange rate fluctuations of currencies, divided by the months of the year. 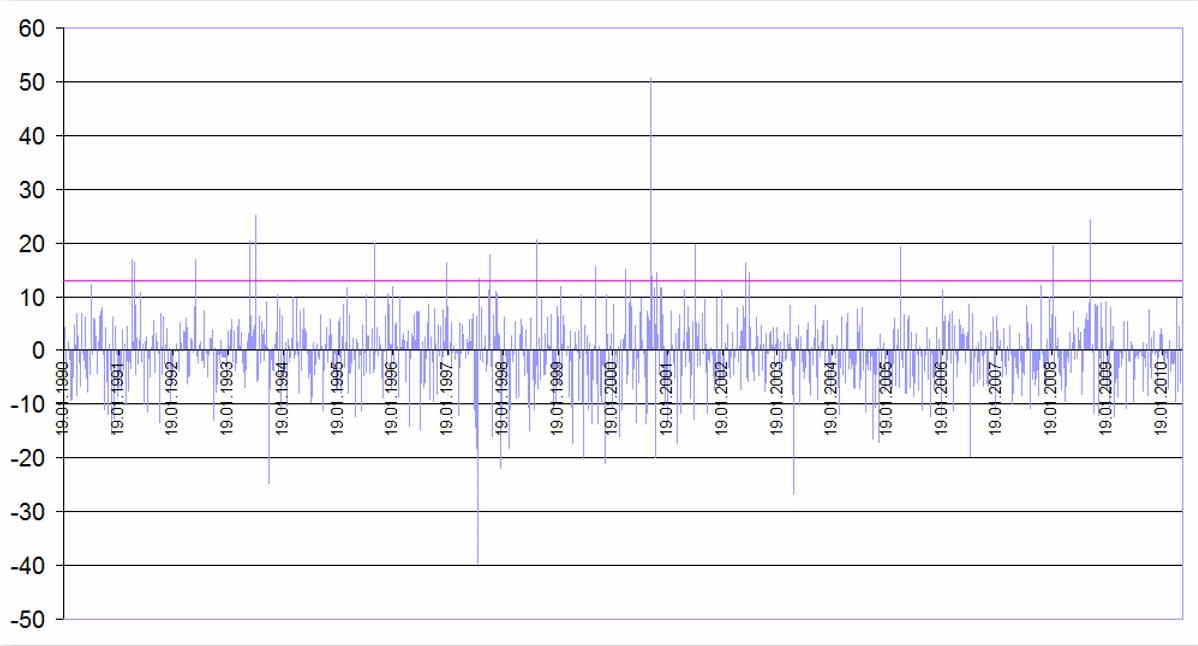 Notice how they started to change in the 5 and 10 years period relatively to a longer, 15-year, period. The reason for this is “pumping” national economies with “cheap loans” in recent years.

The problem is well illustrated by gold: the XAU/USD pair traditionally grew in November and was actively sold in December, and the released investments were used to buy shares. During the last five years, gold continuously loses to the US dollar, like other national currencies. With very low or even zero inflation rate, investors are more inclined to buy treasury bonds than precious metals.

This specific demand hit the AUD/USD pair. Dependent on gold mining, the Australian Dollar has changed the downward 15-year seasonal trend to a steep peak in the last five-year period. Perhaps by Thanksgiving, traders should search for a market entry point for sales and try to hold the position throughout December.

Forex arbitrage adherents may be attracted by the possibility of hedging the sale of AUD/USD pair with a long position at NZD/USD (or buying a cross). If the Australian currency is falling due to the weakening of gold, then the economy and currency of New Zealand grow being dependent on the dairy and agricultural products supply.

What is the Christmas without a feast? In fact, retailers will pick up goods for the future to "survive the long weekends". The national currencies AUD and NZD are connected by correlation, the indicator shows the correlation of quotes in the amount of 84%. If the AUD short positions start to lose, New Zealand currency may cover losses.

European Central Bank’s zero interest rate, economical problems and Brexit led to an increase in the uncertainty in the euro’s trend of the in 10- and 5-year periods. The seasonal chart shows that mid-term traders can fall into a “flat saw”, which can lead to market losses due to the lack of a clear trend in conjunction with high New Year's volatility.

In Japan, the negative rate has been existing for a long period, which leads to the frequent growth of the USD/JPY pair in November and December. Traders can use a reverse pyramid or “grid trading strategy” which can pay off in two months.

GBP/USD pair demonstrate a rally in the end of November, when the British currency is influenced by the national stock market. The Central Banks’ schedule of meetings is another factor in the Christmas rally of the British Pound. The Bank of England meets in November when the Fed is not holding meetings.

This year, the seasonality factor can defeat Brexit, a four-year «divorce» from the European Union is approaching the final, which can unpredictably affect the interest rate and the Pound.

A more profitable idea would be to sell national currencies close to the United States - the Mexican peso (USD/MXN) and the Canadian dollar (USD/CAD), which are strongly influenced by the US Christmas stock rally.

How regularly is the Christmas rally observed on the Forex market?

The market tool for measuring seasonal movements of currency pairs operates with average relative values, which makes it difficult to grasp the likelihood of the above trends. Almost all of them are based on the growth of the US dollar due to rising demand for this currency due to the soaring prices of US stocks.

The chart below shows the November-January intervals from 1999 to 2018 for the S&P 500 stock index. During two decades, the rally broke down 5 times, and if you take into account the entrance to the year if the crisis, the count is six, which puts the rally strategy in a range of average trading tactics.

If you apply a similar simple methodology for checking the effectiveness of rally entries to the USD/CAD pair, the result may be even worse: during previous 15 years, the trend in 50% of cases has not met the traders’ expectations.

“There is no silver bullet” - this is the American traders’ common expression which is applicable to those ones who hope to earn on Christmas rally annually. Like other similar strategies, this trading strategy is based on the probability of an event, which does not allow a trader to fully rely on it when they place a trading order.

Of course, knowledge of this phenomenon in itself can play a role in taking a trading decision to enter the market. For instance, transactions in a counter trend in the presence of strong resistance or support will force a more deep search for signs of a false breakdown. Each trader can decide how to use this information as a seasonal additional filter to an existing trading system.

How to trade stocks with maximum outcome

Investing in stocks is an attractive way to become part of the world's best-known companies. However, not every investor knows how to trade stocks efficiently...

Rather than starting to invest in Bitcoin, trading Bitcoin can be even more profitable than investing alone. Trading Bitcoin involves taking full advantage of the asset's...

What Is a CFD? Contracts For Difference Explained

CFD trading may not sound like much at first, but it opens traders up to an entire world of possibility in terms of trading assets and finance. CFD is an abbreviation...

Cable or Loonie? The ultimate guide to currency nicknames

What are these pro-traders talking about? Who or what are Matie and Guppy? Are they distant relatives or secret code words to enter a sorority?

Is Demo Trading Really Worth It?

There is an unfavorable outlook on demo trading merely for the fact that you canâ€™t generate profit with virtual money. A lot of traders essentially...

Bullish vs. Bearish: What's the Difference?

Bull vs bear describes investment trends that have the power to impact the global financial markets. You've probably heard investors refer to a market...

The origins of Forex

What is a moving average and how do I use it?

Moving averages are one of the easiest types of technical indicator to understand and use. They provide a simplified view of the price action of an asset, with most...

A brief history of Forex

When you think of forex today, you likely conjure up an image of a flat-screen digital device full of real-time figures, fluctuating graphs, notifications...