The bears had a firm grip on the GBPUSD currency pair on the D1 time-frame, and that have brought on a prolonged downtrend that lasted for more than three weeks until 23 September. Then when a lower bottom was recorded at 1.26751 as the bulls found the low price attractive and started entering the arena.

The price was then driven upwards and the motion caused the market to break through the 15 Simple Moving Average and it briefly touched the 34 Simple Moving Average. The Momentum Oscillator also crossed the zero baseline into the greens. This could have indicated to attentive technical traders that a possible new trend was in the making.

After the market make a top and possible critical resistance level on 6 October at 1.30068,  the bears were trying hard to regain control but to no avail, as a higher bottom that was formed on 7 October at 1.28446 clearly indicated that the bulls are putting up a good fight. 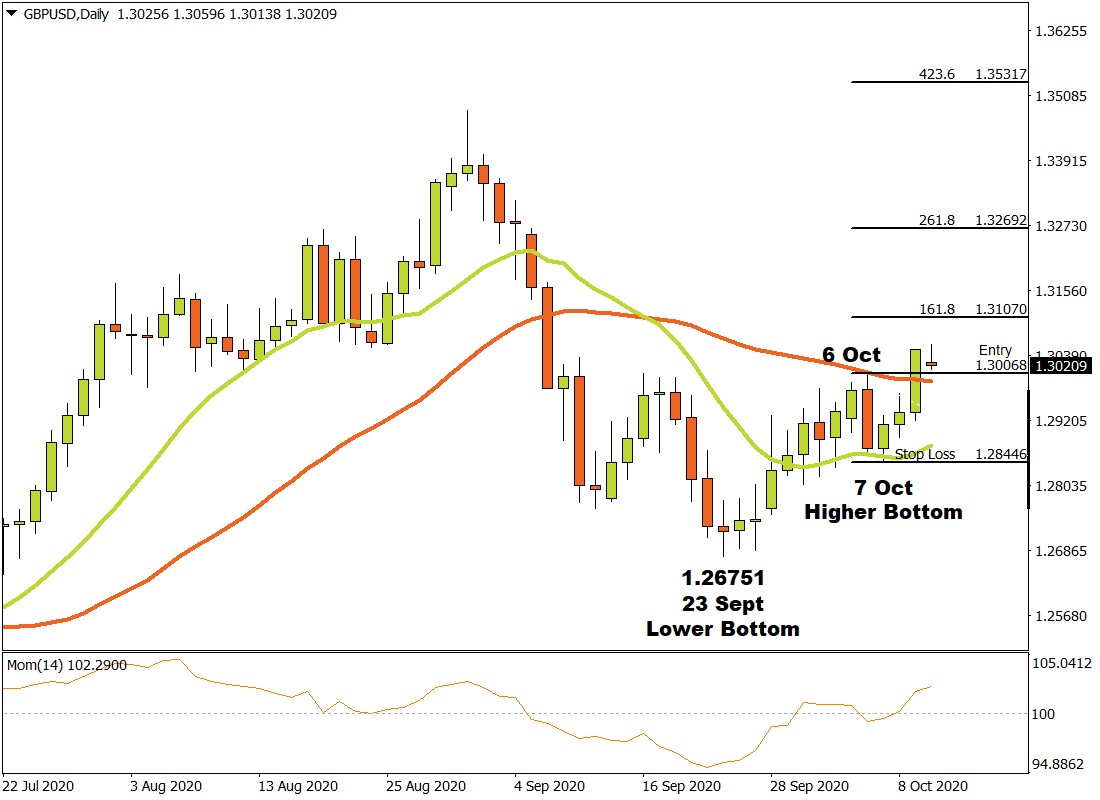 On 9 October, the bullish sentiment caused the market to break through the critical resistance level at 1.30068 and from a structural view point, a long trade was possible as the price was driven past the previous top, thus objectively confirming not only a higher bottom but a higher top in the making as well. This is in line with the definition of an uptrend, namely consequtively higher tops and bottoms.

Three possible price targets were calculated by applying the Fibonacci tool to the top of the resistance level at 1.30068 and dragging it to the support level created by the higher bottom at 1.28446. The first target can be projected at 1.31070 (161 %). The second price target is likely to be at 1.32692 (261.8%) and the third and final target may be expected at 1.35317 (423.6%) if the uptrend continues. If the 1.28446 support level that formed at the higher bottom is reached, bullish scenario above are invalidated and will need to be reassessed.

As long as market players continues to maintain a positive sentiment towards the Sterling and demand overwhelms supply, the outlook for Sterling on the Daily time-frame will remain bullish.

Risk assets are looking to end the week, and the year, on a high. US stock futures are edging into the green, indicating the S&P 500 and the Nasdaq...

After being trapped within a wide range for many weeks, Gold has finally broken below the stubborn $1850 support level. The primary culprits behind Gold's sharp

Asian stocks are mostly tracking Thursday's declines on Wall Street, with most US and European equity futures edging lower at the time of writing...

It has been a momentous week defined by anticipation, tension and drama around the US presidential election. The outcome of this historic election remains on...

It's still too early to make a decisive call, but markets appear to be paring back hopes for the so-called "blue wave". Expectations for a landslide win for Democrats...

The Pound is the clear winner today after the EU's chief negotiator Barnier said in a speech to the European Parliament this morning that an agreement with the UK...

Our commodity spotlight this week shines on Gold which seems to be waiting for a fresh directional catalyst. Since mid-August, it has felt like the same old story for...

Signs that the spread of coronavirus is gathering pace and dwindling US stimulus hopes have dented sentiment today, with major US stock markets opening...