Recall that the head of the Fed Jerome Powell literally brought down the American stock markets with his speech on February 4. Powell stayed indifferent to the surge in US Treasury yields, which closed at an annual high. At the same time, he hinted at the possibility of premature tightening of monetary policy.

And although the head of the Fed stressed that the economy is far from overheating, and he does not yet see the need to raise the interest rate, the market has had a hint of a possible change in monetary policy. In response, the Treasury yields rushed up with the dollar, and the stock market rolled down. The S&P500 lost over 120 points and the Dow Jones Industrial Average lost over 300 points.

And then, everything changed on Tuesday March 09. Strong growth in technology stocks, positive statistics from the labor market, growth in household assets and a bill signed by US President Joe Biden on a new stimulus package for $1.9 trillion pushed the American stock market up. The S&P500 index not only fully recovered from losses, but also updated its historical high, reaching the mark of 3.960. As for long-term treasuries, their profitability, on the contrary, has stabilized. And this despite the fact that the volume of submitted applications exceeded the volume of the issue by 2.38 times, and foreign investors purchased about 20% of securities of the total volume of $38 billion.

The EUR/USD pair reached a height of 1.1990 on Thursday March 11 due to these factors. However, it failed to reach the 1.2000 level. The fall of the pair and the weakening of the euro was facilitated by the statement of the ECB management on the increase in the rate of buying bonds under the PEPP (Pandemic Emergency Purchase Program). But it turned out to be not convincing enough, and nothing was said about scaling up the PEPP. As a result, the fall of the pair was insignificant, and it ended the week at the level of 1.1950;

More and more experts are wondering if the pound has passed its high on February 24. Is it time to consolidate with the dollar? The British currency has shown an impressive growth of 2830 points against its American “colleague” (from 1.1410 to 1.4240) starting from the third decade of March 2020. And we have been observing the sideways movement of the GBP/USD pair along the Pivot Point of 1.3900 for the last two weeks. The upper border of the trading range is drawn quite clearly: this is the resistance at 1.4000. Two support levels can be considered as the lower one: the nearest one - 1.3850 and the next one - 1.3775.

The GBP/USD chart of the last week is very similar to the EUR/USD chart. This suggests that both the pound and the euro are not so much independent players in the market now as hostages of the US Federal Reserve's monetary policy and rates on US government bonds. Having started the five-day week at 1.3840, the pair was moving within the above range for the whole week, and set the last chord at 1.3925;

The yen has passed one milestone after another in recent weeks, and the USD/JPY pair reached the eight-month highs. Many traders are afraid to open both long and short positions in such a situation. On the one hand, the pair was already overbought, and on the other, it could still fly further upward by inertia. This is what happened in fact: it first rose to the level of 109.25, then a correction to 108.35 followed, and a new rise to the horizon of 109.00, where the pair ended the working week;

Bitcoin peaked at $58,340 on February 21, after which it pulled back to $43,160, shrinking by 26%. According to Material Indicators, this decline was used by whales and institutions to buy assets from small investors. For example, the number of orders for the purchase of BTC in the amount from $0.1 million to $1 million reached record values on the Binance crypto exchange. And now, twenty days later, on March 12, Bitcoin broke the $58,000 bar again. However, at the time of writing the review, It could not update the historical high, stopping at $58,240

The BTC/USD pair rose last week amid the rise in the US stock market. Although, most likely, this is only a formal reason, and not a real reason for the activation of the bulls. It was clear that they would definitely make an attempt to rise above $60,000. And the only question was when it would happen.

According to CryptoQuant, the demand for bitcoins continues to grow, and their number on exchanges has fallen to a two-year low. As Bloomberg experts point out in their February report, bitcoin is becoming an increasingly popular asset among a wide variety of investors and is gradually replacing gold from their portfolios. According to the authors of the report, the reduction in the range of price fluctuations signals that the main cryptocurrency has actually become an alternative to traditional investment assets.

The overall capitalization of the crypto market is also committed to new heights, along with bitcoin. It grew from $1444 billion to $1756 billion over the week. And now the volume of $2 trillion will become an important psychological level for it.
Interestingly, despite the weekly growth of the BTC/USD pair by 20%, the Crypto Fear & Greed Index, on the contrary, fell from 77 to 70, which may indicate the general bullish mood of the market.

And another interesting observation. Bitcoin's market dominance has declined from 70.4% to 61.4% since early 2021. The indicators of altcoins from the TOP-10 have also gone down or remained at the same levels. But the total capitalization of smaller tokens has risen from 10.3% to 14.4%. It is unlikely that these coins can arouse the interest of large investors. Therefore, such statistics can only indicate that players have begun to use them more actively for short-term speculation.

As for the forecast for the coming week, summarizing the views of a number of experts, as well as forecasts made on the basis of a variety of methods of technical and graphical analysis, we can say the following:

A meeting of the US Federal Reserve will take place on March 16-17. We are waiting for the Summary of Economic Forecasts from the Open Market Committee (FOMC), the decision on the interest rate, commentary on monetary policy and a press conference by the Fed management following the meeting. The interest rate is likely to remain unchanged at 0.25%. Therefore, the regulator's forecasts will be of particular interest. High expectations will once again highlight the gap between the pace of economic recovery in the US and the Eurozone. Investors will also be concerned about the possibility of tightening monetary policy and the attitude of the Fed management to changes in government bond yields. Consolidation of 10-year yields in the 1.5-1.6% range will help the stock market and push the EUR/USD pair above 1.2000.

An alternative view is held by 30% of analysts, supported by graphical analysis on H4. As for the technical indicators on this time frame, their readings are still confusing. Note that when switching from a weekly to a monthly forecast, the number of experts supporting bulls increases to 60%. Resistance levels are 1.2025, 1.2060, 1.2170, 1.2200 and 1.2270; 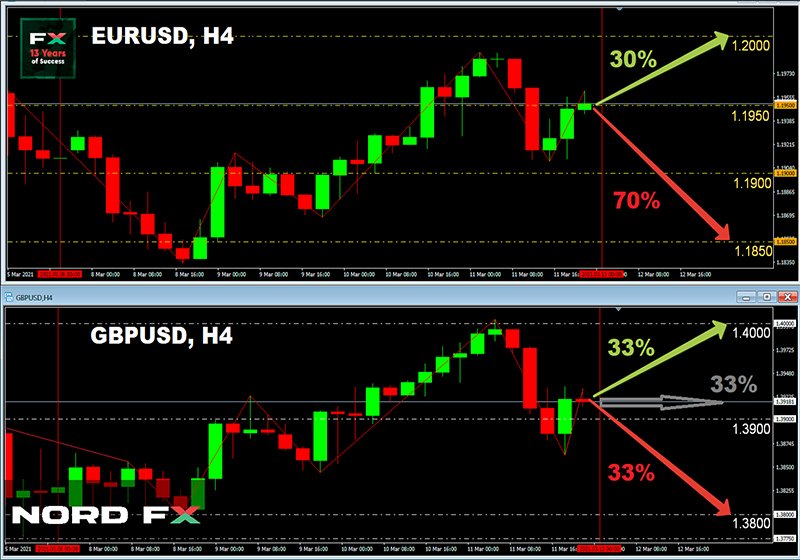 A number of experts are pessimistic. As the reason, they point to miners who are buying more and more video cards on new chips, which leads to higher prices and a shortage of such cards on the market. This situation is somewhat reminiscent of the end of December 2017 - January 2018, when the mining boom ended with a market collapse, the destruction of many miners and the onset of a crypto winter. There may not be a new winter this time, experts say, but strong frosts are not entirely out of the question.

In the longer term, electricity costs for mining will also hinder the growth of digital assets. They are constantly growing, and this process consumes energy comparable to that of a country like the Netherlands already. At some point, it will require the energy of the whole world to generate just one unit. And this, according to futurologists from Singularity University, will become an insurmountable obstacle for the crypto market.

However, if there are bear pessimists, then there will certainly be bull optimists. So, according to the head of ARK Investment Cathie Wood, the price of bitcoin is most correlated with real estate prices  at the moment. But in the future, she believes, bitcoin will become similar to low-risk instruments like bonds and will enter the recommended portfolio of investors. “I think the first cryptocurrency will behave like fixed income markets,” Wood said to CNBC. “We have survived a 40-year bond bull market. And we won't be surprised if this new asset class becomes part of the investment portfolio. Perhaps it will be 60% stocks, 20% bonds and 20% cryptocurrency.”

The forecast, according to which the bitcoin rate may reach $1 million or more in the next 10 years, was announced by the CEO of the Kraken crypto exchange Jesse Powell. “Right now we are only guessing, but if you value bitcoin in dollars, then you must understand that its value tends to infinity", he said. In a dialogue with Bloomberg reporters, the head of Kraken also said that bitcoin could eventually replace all major fiat currencies that are not backed by gold and other precious metals. However, he agreed that there is a risk of sharp market fluctuations, and that prices could "rise or fall by 50% any day." Therefore, according to Powell, when investing in bitcoin, it is necessary to be ready to keep it in your portfolio for at least five years.

The dollar continues to strengthen, and the EUR/USD pair moves south. Starting on Monday September 13 at 1.1810, it ends the five-day run at 1.1730. The movement...

Strong US data revived bets on an imminent QE rollback from the Fed, supporting the dollar and causing bond yields to rise. The news triggered a more than 2% plunge in gold prices...

Stocks pick up some bid after textbook SP 500 bounce

European stock markets were modestly higher on Thursday after a rebound in the US and another dip for Asian equities overnight. Hong Kong down 1.7%...

US and European futures are trading lower today, following a retracement in US indices. The Dow Jones Industrial Average fell nearly 290 points, wiping out gains...

Futures in the United States and Europe are up today

Futures in the United States and Europe are up today after the Dow managed to gain nearly 260 points and break its five-day losing streak. Although investors...

Everything you Need to Know about Precious Metals