The highlight has been the ECB meeting, but the volatility was not there and it was a big event for economists. However, not so much for traders, who saw EURUSD push into 1.1841 only to then fall to 1.1805. At Pepperstone, our clients were net short across the EUR pairs, so there were some small profits made here, although EURUSD has pushed back to the pre-ECB levels now and is flat on the day.

Round number support at 1.1800 and the 50-day MA (1.1803) needs to give way for shorts to get any real traction here. Short EURCHF has been the better trade (given the movement), with price making a lower high and reversing off the 100-day MA into the August swing high and former downtrend. This may kick lower – one for the radar. 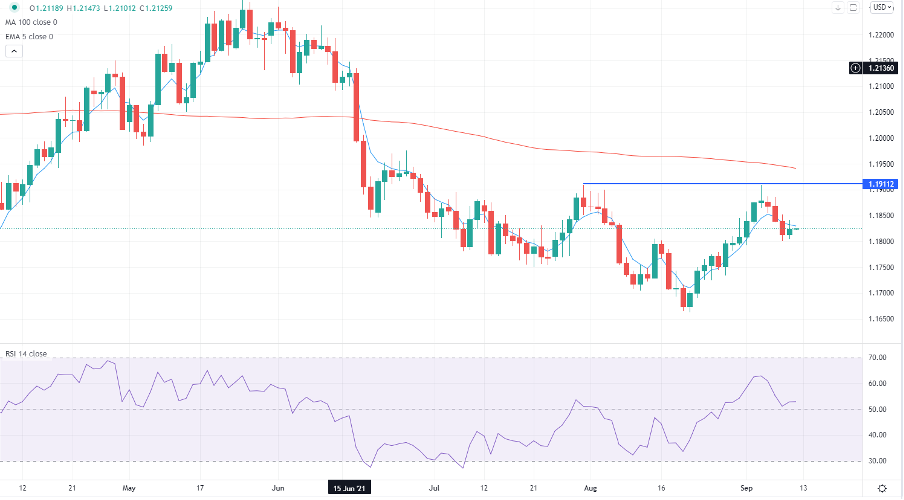 German bunds fell 4bp on the day, while Italian 10yr BTPs -8bp, so I guess the reaction to the ECB meeting was net dovish, even though on first blush and as suggested could be the case (in yesterday’s musings), the bank moved to a more “moderate pace” of asset purchases, with Reuters later detailing this was closer to E60-70B. Christine Lagarde was quick to hose this down saying “the lady isn’t tapering” and described it as a recalibration. The fact that estimates of core inflation in Europe for 2023 increased by mere 10bp to 1.5%, despite all the stimulus shows not only that price pressures are expected to be transitory, but one has to ask how on earth do they get to 2%??

GBPUSD has seen good flow too, with the move into 1.3850 attracting a few sellers – a messy tape on the daily, price action needs work to convince the herd will start to move as a collective – otherwise, this is one for lower time frames.

Talking of inflation, this coming Tuesday (22:30 AEST) we see US August CPI, and that may get bonds and the USD fired up – the consensus is for 5.3% YoY on headline and 4.3% on core, which is largely unchanged from July – depending on the outcome the CPI read could move expected inflation and therefore have an influence on real US Treasuries – in turn, maybe gold could break out of its shackles.

As mentioned in yesterday’s live Gold stream the hallmarks are for Gold to be a range trade with 1819 to 1765 the higher probability play – on an options distribution model a break of 1833 over the coming week, the real test for the yellow metal, sat at just 7.4%. We’ve seen small net buying, likely driven by another move lower in US real Treasury yields (10yr TIPS are -6bp) but price is capped at the 5-day EMA.

Staying in the commodity vibe, and Nat gas has seen some good flow and is wearing a 5-handle, with the rally taking the move from the March low to 91%. Lumber has pushed 2.6% higher and copper to has etched out a 1% rally. Crude, on the other hand, has dropped 2%, something clients would generally be receptive too given 59% of open positions are held short. Positions given a nice boost on news China was going after the high energy cost base, releasing additional supply from its crude reserves. Price action wise, a bearish engulfing off the 50-day MA puts us on notice – if this can kick on lower then $66.60 would be a near-term target.

In equities, all the move was in the HK50 and AUS200 yesterday, with Chinese authorities going after gaming plays – Tencent remains a trader play, although while we see decent movement its one that is subject to increased news risk. The lead-in from futures is a touch more optimistic, so we expect a small pop in Asian equities (in the cash) on open, but whether this can be sustained, or whether traders sell into strength is a key point. US stocks are down smalls, with both S&P 500 and Dow falling for a fourth straight day 2000, with small early gain evaporating and it was one-way selling into the close – a market closing on its low is rarely a good sign. However, on that point, I ran the numbers and saw that since 2000 if one was to buy either index on the following open (after four down days), hold for a day and sell on the next open, the strike rate would be 90.6% - the average win would be 3.9x the average loss. Can history repeat?

Back tested results after four down days

Value seems to have outperformed – with COVID-19 cases falling in over 80% of states (in the US) perhaps the banks and re-opening plays may work better – put the KBE ETF on the radar, or the individual banks, such as BAC or JPM.