Forex and Cryptocurrency Forecast for September 13-17, 2021

The ECB meeting on Thursday 09 September went off as expected with no surprises. The interest rate remained unchanged at 0%. The European regulator has proposed a “dovish” reduction in the monetary stimulus program (QE). More precisely, according to Christine Lagarde, the bank's governor, it is not even about “tapering” but “recalibrating” the program. And the decline in asset purchases in Q4 is just a reversal of the decision made in March to increase them. In doing so, the ECB remains flexible, and may change the pace of purchases early next year if necessary.

It is likely that the regulator does not want to take any sharp moves until its meeting in December, when it will have to present a clearer plan to wind down QE. In the meantime, it will monitor the development of the situation. The results of the parliamentary election in Germany, which will be held on September 26, will be of great importance. Especially since this will be the first election since 2005 in which the Christian Democratic Union will not be led by Angela Merkel.

Economic growth sides with the bulls on the EUR/USD pair, while the monetary policy sides with the bears. There have been no clear signals from the ECB, and they are unlikely to arrive until December. Therefore, the market will still be waiting for them from the US Fed to decide which currency to prefer.

The long life of the European QE program has been mentioned above. The Federal Reserve may begin to cut its QE already this year and complete it by the end of 2022. This view is held by the hawkish lobby in the leadership of the US Central Bank. FOMC member Michelle Bowman has even specifically stressed that disappointing employment statistics for August would not get the Fed out of the way. 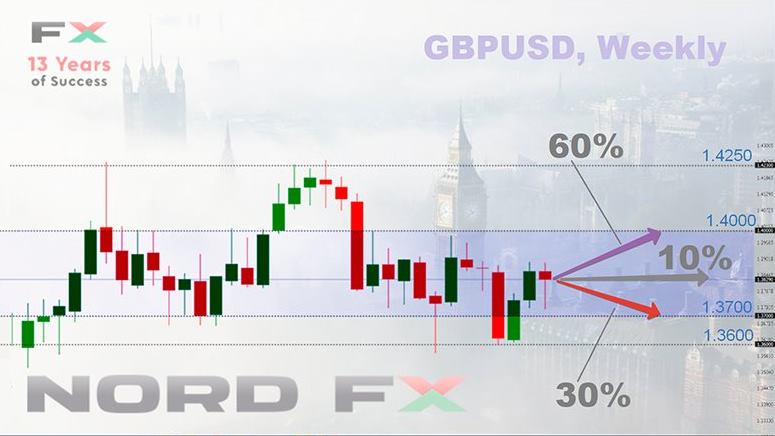 As for the oscillators on D1, 70% are colored green, 15% have taken a neutral position, and another 20% indicate that the pair is overbought. In trend indicators, like a week ago, the greens win 9-1.
Events in the coming week include the release of unemployment data in the UK on Tuesday, September 14, and statistics on the country's consumer market on Wednesday, September 15.

Being a safe haven, the USD/JPY pair has been moving along the 110.00 horizon since last March, making rare attempts to get out of the 108.30-111.00 trading channel. So this time again, having started the five-day week at 109.70, it ended the week almost at the same place where it began, at the level of 109.85. Moreover, the trading range has become even narrower, keeping within 85 points: from 109.60 to 110.45. Those who are actively trading are hardly happy with such volatility. Although, on the other hand, it allows you to quite accurately place Stop Loss and Take Profit orders and taking into account the minimum spreads and leverage up to 1: 1000, you can make significant profits with the NordFX broker even in such a narrow corridor.

The experts' forecast for the near future looks like this: 50% of them side with the bears, 15% - with the bulls, and 35% have taken a neutral position. As for the indicators on D1, the red ones have 60% advantage among oscillators, the green ones have 10%, and those that have taken a neutral, grey position - 30%. Trend indicators have a 50-50 draw.

The past week on the crypto market can be reduced to one day, Tuesday September 07. A law came into force in El Salvador on that day recognizing bitcoin as a legal means of settlement on par with the dollar. The country's young president, Nayib Bukele,  twitted about this three minutes before midnight local time. “In three minutes we will go down in history,” he wrote. Earlier, the head of state confirmed that the government of El Salvador acquired the first 200 BTC. Bitcoin has been rallying since July 20 and has jumped above $52,000 since this announcement.

Roughly 20% of the country's GDP comes from remittances that Salvadorans working abroad send to their relatives. The huge commissions in USD that have to be paid are extremely unprofitable and enrich the US financial structures. This is what has been one of the main reasons for bitcoin adoption. However, for most Salvadorans, a third of whom do not even use the internet, digital assets still remain a mystery behind seven seals. According to surveys, about 70% of the population fear the innovations, and pensioners believe that the government wants to take away their USD pensions in this way. The result of these concerns and misunderstandings were protests and demonstrations that swept across the country.

The World Bank refused to support the initiative of Nayib Bukele, which jeopardizes the receipt of tranches from the IMF. According to analysts, El Salvador does not have specific laws to address the many nuances of bitcoin use, increasing the risks associated with money laundering and terrorist financing . And leading rating agencies such as Fitch believe El Salvador's insurance industry will be particularly hit. Bonds rated B- are already circulating in it, and now the situation will be aggravated by the presence of an unstable cryptocurrency.

Then the leading cryptocurrency managed to win back some of the losses, and it is trading in the range of $45,000-46,000 per coin at the time of writing the review, on Friday September 10. The Crypto Fear & Greed Index has shifted into the fear zone, dropping from 74 to 46 points. The total crypto market capitalization fell below the important psychological level of $2 trillion to $1.975 trillion by September 08, but then rose to $2.100 trillion by the end of the working week.

Despite what has happened, many experts are still positive about the prospects for both bitcoin and ethereum. For example, senior strategist Mike McGlone called the $100,000 mark for bitcoin and the $5,000 mark for ethereum as "the path of least resistance" in the September Bloomberg Crypto Outlook report. “Crypto assets enter a renewed second-half year bull market after a serious drop from previous highs,” the Bloomberg expert noted, adding that he sees “bitcoin's future as a digital reserve asset to complement the dollar.”

The management of the billionaire Bill Miller's Miller Opportunity Trust also speaks about the significant growth potential of the BTC/USD pair, calling bitcoin a digital analogue of gold. “Gold capitalization is $11 trillion, bitcoin is only $900 billion, which is a significant lag. We are in the early days of bitcoin adoption and the asset will be very volatile, but we believe the risk to reward ratio is attractive," the Miller Opportunity Trust said in a statement filed with the US Securities and Exchange Commission (SEC).

Ark Invest CEO Cathy Wood also believes that the cryptocurrency market is far from the end of the rally. There are no signs of a price bubble in the markets, she said. “We think bitcoin is much more than a store of value or digital gold. This is a new global monetary system that is completely decentralized and not subject to politicians' whims". That being said, Cathy Wood thinks the next five to fifteen years will be very provocative, causing the quotes to draw S-shaped curves. And therefore, for the sector to mature, regulation is needed that will affect bitcoin in the most positive way.

Analysts at the international banking group Standard Chartered have also given a positive assessment of the outlook for bitcoin and ethereum. They compared the first with currency, and the second with the financial market, where lending, insurance and exchange transactions take place. Therefore, given the wider range of ETH use cases, its capitalization may eventually reach that of the first cryptocurrency.

Standard Chartered predicts bitcoin prices in the $50,000-$175,000 range and ethereum in the $26,000-$35,000 range. Thus, these cryptocurrencies should grow threefold and tenfold, respectively. “While the return on ETH may outperform BTC in the future, the risks associated with it are also higher,” the bank representatives said.

On average, 20% of analysts agree that the BTC/USD pair will cross over $50,000 in the coming week, their number increases to 40% onthe monthly forecast, and 80% agree that it will happen before the New Year.

The dollar continues to strengthen, and the EUR/USD pair moves south. Starting on Monday September 13 at 1.1810, it ends the five-day run at 1.1730. The movement...

Strong US data revived bets on an imminent QE rollback from the Fed, supporting the dollar and causing bond yields to rise. The news triggered a more than 2% plunge in gold prices...

Stocks pick up some bid after textbook SP 500 bounce

European stock markets were modestly higher on Thursday after a rebound in the US and another dip for Asian equities overnight. Hong Kong down 1.7%...

US and European futures are trading lower today, following a retracement in US indices. The Dow Jones Industrial Average fell nearly 290 points, wiping out gains...

Futures in the United States and Europe are up today

Futures in the United States and Europe are up today after the Dow managed to gain nearly 260 points and break its five-day losing streak. Although investors...

Could rising equity volatility into options expiry spill into other markets?

While we saw some genuine strength in the Nikkei 225 and to a lesser extent Chinese/HK markets last week, we’ve seen signs that US equity indices are at risk of talking...