Macro statistics were mixed last week. But few people pay attention to it at the moment. The difference in the monetary policies of the Fed and the ECB pushed the EUR/USD pair down both in 2021 and in January-February 2022. The fire that arose not far from its power units was extinguished, but this did not make it any easier: Chernobyl has not been forgotten in Europe yet, and no one wants a new nuclear catastrophe that could claim millions of lives.

It is difficult to imagine how, in such a situation, the ECB will be able to curtail monetary stimulus and raise interest rates. As for the US Federal Reserve, this regulator is unlikely to abandon its plans.

Speaking in Congress on Wednesday, March 02, Fed Chairman Jerome Powell named a number of advantages of the US currency. The first is the flight of investors from risk to such safe-haven assets as the dollar. Other trump cards include divergence in monetary policy with European countries and the growth of the US economy. By the way, such an important indicator as the number of new jobs created outside the US agricultural sector (NFP) has confirmed Powell's words, showing real growth to 678K against a forecast of 400K (481K a month ago).  And this, as Jerome Powell said, will require a more vigorous increase in interest rates. That is, they may be even higher by the end of 2022 than the market expects. 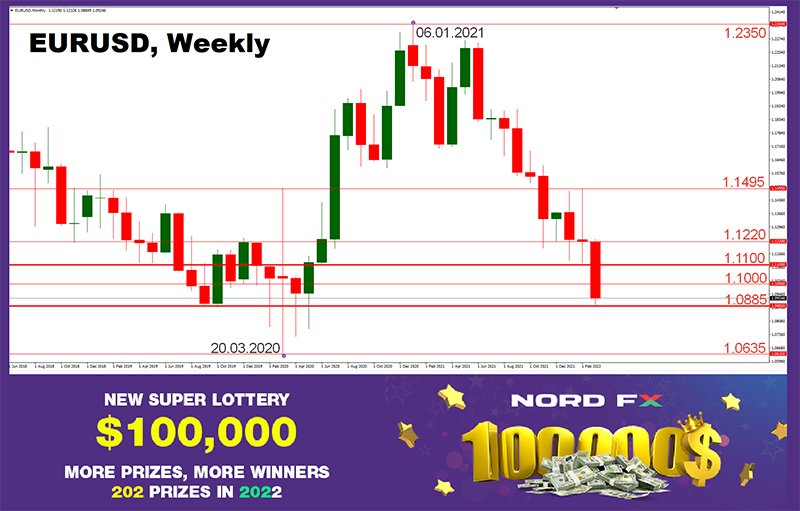 The previous week's forecast suggested that the EUR/USD pair would retest support at 1.1100, after which the bears would try to reach the landmark horizon of 1.1000. Such a scenario seemed very bold and almost unbelievable on February 25. But the events described above led to the fact that the pair easily broke through the seemingly "impenetrable" support of 1.1000 and collapsed to 1.0885, having lost 385 points in a week. The last chord, after a small correction, sounded at the level of 1.0932.

Amid mounting geopolitical tensions, the euro has lost more than 600 points to the dollar since February 10 and is now rapidly approaching the 2020 lows. And it is not far to parity 1:1. It is extremely difficult to predict where the bottom will be in the current situation. It was at around 1.0635 in 2020, the pair was falling to 1.0325 in 2016. Perhaps these values will become support levels.

As for the bulls, taking into account the increased volatility, their immediate goal is a return to the 1.1000 zone, followed by resistance in the 1.1100-1.1125 area, then a wide zone of 1.1280-1.1390, then - the highs of January 13 and February 10 in the 1.1485 area. However, the pair will be able to achieve them only if hostilities cease or, at least, when a stable truce is concluded. Most analysts hope for the best: 65% of them vote for the fact that EUR/USD will be able to return to at least 1.1200 within March. But trend indicators and oscillators on D1 have a completely different opinion: they are all colored red, although 25% of the latter are in the oversold zone.

As for economic statistics, data on retail sales in Germany will be published on Monday, March 07, then the data on GDP in the Eurozone on Tuesday. The event of the week can be Thursday, March 10, when the ECB meeting will take place. The interest rate is likely to remain the same at 0%, so the subsequent press conference of the regulator's management will be of more interest. Data on the US consumer market will come out on the same day, and we will find out the values of the harmonized consumer price index in Germany and the US University of Michigan consumer confidence index at the very end of the week, on Friday, March 11.

The EU's dependence on Russian gas was about 45-50% before the introduction of sanctions. Unlike the countries of the European Union, the UK is practically independent of Russian gas supplies: this figure is less than 3%. Its trade turnover with the Russian Federation is much lower as well.

All these factors helped the GBP/USD pair to stay in a sideways trend for several days. But against the backdrop of events around the Zaporizhzhya NPP, it still could not resist and updated the February 24 low, dropping to the level of 1.3201. The week finished at 1.3246.

USD/JPY: Yen or Dollar: Which Safe Haven Is Better?

Although Japan has joined the sanctions, this has not ceased to be a safe haven for investors. Therefore, everything that literally makes Europe feverish does not affect the dynamics of the USD/JPY pair. It continued to move along the 115.00 horizon last week, fluctuating in the range of 114.65-115.77. And it completed the five-day working week not far from its lower border, at 114.81

That is, when the dollar rose against the euro and the pound, it fell against the yen. Competition between these two safe-haven assets will undoubtedly continue next week. 75% of analysts believe that the pair will return to the upper limit of the channel, while 25% believe that it may fall further down.

Bitcoin trading volumes increased sharply on Monday, February 28, and the coin itself jumped in price by almost 17% (from $37,840 to $44,220). The number of bitcoin addresses with balances over 1,000 BTC increased by more than 6% to 2,226. The indicator had not reached this level since March 2021. The number of addresses with a balance of 100 to 1000 BTC  also increased on February 28, although not as noticeably. The indicator increased by 1.3%, to 15,929 over the day. This is evidenced by the data of the Glassnode service.

According to Bloomberg, the National Security Council of the White House and the US Treasury Department appealed to the operators of the world's largest centralized exchanges with a request to stop any attempts to circumvent the sanctions. The White House spokesman said that cryptocurrencies are not a replacement for the US dollar, which is widely used in the Russian Federation. However, the US authorities intend to combat their misuse. European Central Bank President Christine Lagarde also called for increased regulation of digital assets in the euro area.

At least four cryptocurrency exchanges, including Coinbase and Gemini, have said they will take steps to tighten controls. According to well-known economist and analyst Alex Kruger: "Don't expect this to happen. But be careful in your actions,” he warned, adding that if the geopolitical situation does not worsen, investors will soon see the growth of the crypto market.

The dynamics of the cryptocurrencies’ movement between private and exchange wallets indicates the lack of certainty among investors regarding the further developments in the digital asset market. This is written by CoinDesk with reference to the report of Bank of America (BofA).

According to analysts, the tightening of the Fed's policy and macroeconomic factors will limit the growth of cryptocurrencies in the next six months. However, BofA emphasized that this will not be the beginning of a new "crypto winter", as the level of adoption of digital assets by users and the activity of developers has increased significantly. The bank also added that it will be difficult for the digital asset market to move out of the current price range until fears of a possible recession are discarded.

After the jump on February 28, the upward movement of the BTC/USD pair slowed down on March 01-02, when approaching the strong $45,000 resistance zone. And then, after an unsuccessful attempt to break further up, it turned back to the south. (Recall that this resistance had already sent the pair down several times in January-February). If the flagship currency still manages to rise above $45,700 at some point, we can expect its further growth to $47,000-50,000 due to the triggering of a large number of buy orders.

Legendary trader Henrik Zeberg, author of The Zeberg Report and expert on macroeconomic cycles, presented three charts to show that major stocks and cryptocurrencies are poised to rise in Elliot Wave 5. According to Zeberg, the most important stock market indices S&P500 and Nasdaq are approaching bullish reversals on the weekly charts. If his prediction comes true, bitcoin could once again increase its correlation with stocks and indices.

At the time of writing (the evening of March 04), the BTC/USD pair is trading around $39,300, the total market capitalization, after rising to $1.963 trillion, returned to the values of a week ago at $1.755 trillion, and the Crypto Fear & Greed Index grew by only 6 points (from 27 to 33 points), having firmly stuck in the zone of Fear.

Bloomberg Intelligence Chief Strategist Mike McGlone reiterated that bitcoin is well on its way to becoming an international reserve asset. He assured that the BTC rate will reach $100,000 in 2022. The analyst also emphasized that the price of the flagship digital currency will not drop to $30,000 despite the bearish sentiment in the market.

McGlone also believes that such coins as Dogecoin must lose their influence in order for bitcoin to finally establish itself as a reliable tool for protecting money savings.

An AI robot advisor created by Portuguese software developer Tiago Vasconcelos has supported Bloomberg Intelligence's chief strategist's point of view. The coder "trained the bot, explained the rules, candles, principles when you can either buy or sell, or do nothing." The bot receives one point for each profitable trade and loses it as a "punishment" for unprofitable trades. having talen thousands/millions of steps to increase the balance of the trading account, the robot advisor eventually opted for a “hodling” strategy, that is, accumulating bitcoin. (Recall that Hodl is a popular meme in the bitcoin space that arose from a message on the Bitcointalk forum in 2013 with a misprint in the word “hold”).