Forex and Cryptocurrencies Forecast for April 11-15, 2022

The proponents of a stronger dollar won by a very small margin in the previous forecast. 50% of analysts voted for its growth, 40% were against and 10% took a neutral position. The reason for such uncertainty and disagreement was that the market seemed to have already taken into account the increase in the dollar interest rate in 2022 for the quotes. However, despite this, the US currency has continued its growth. The DXY index has gained about 2% over the last week, and the EUR/USD pair, as predicted by bearish supporters, has broken through the support in the 1.0950-1.1000 zone and is aiming at the March 07 low of 1.0805. True, it has not yet managed to reach it, and the pair finished at 1.0874.

EUR/USD: Three reasons for the Strengthening of the Dollar

So why is the dollar continuing to gain strength? There are three reasons for this. The first is the Fed's monetary policy, which is becoming increasingly tight. We are now talking about reducing the balance sheet, which the US regulator intends to reduce by more than $1 trillion a year. And this is equivalent to an additional 3-4 increases in the refinancing rate in 2022-23, 25 basis points each. US Treasury yields will also rise, making the dollar more attractive. The second and third causes are located on the other side of the Atlantic, in Europe. These are the presidential elections in France.

The first round of elections will be held on Sunday 10 April. French opposition leader Marine Le Pen is Eurosceptic. Please note that she almost called for the exit of the country from the Eurozone in 2017. And even if the opposition loses the election, it will still put a spoke in the wheels of European integration. But if Marine Le Pen comes to power, the pan-European currency will certainly not do well. According to some analysts, the EUR/USD pair may fall to the level of 1.0500 or even lower. As for sanctions, we have repeatedly said that they negatively affect not only the Russian economy, but also the EU. First of all, because of the strong dependence of the European Union on energy resources.

The most important event of the coming week will be the ECB meeting and the subsequent press conference of its leadership on Thursday April 14. The probability that the interest rate will remain at the previous zero level is very high. However, investors hope to receive signals on how the European regulator plans to respond to internal and external challenges.

In the meantime, 45% of analysts vote for further strengthening of the dollar. The opposite opinion is shared by 35% and the remaining 20% of experts have taken a neutral position. All trend indicators and oscillators on D1 are colored red, although 25% of the latter give signals that the pair is oversold.

The key and very strong support for the pair is the low of March 15 (and at the same time of 2021-2022), 1.3000. The GBP/USD bears went to break through it, reaching 1.2981 on April 08 during the US session. It seems that European traders, including British ones, are hesitant. But the Americans treat European currencies with disdain, to put it mildly, and continue to put pressure on them against the backdrop of the hawkish minutes of the Fed meeting and the comments of the top leaders of this regulator. As for their colleagues from the Bank of England, the latest comments of these officials were very soft, and raised doubts in the market as to whether the Bank will be able to justify the expectations of tightening monetary policy.

As for the events concerning the economy of the United Kingdom, we can highlight the publication of data on the country's GDP and industrial production on Monday April 11, as well as on retail sales on Tuesday April 12. We will receive a package of information from the UK labor market on the same day, and we will get information from its consumer market on Wednesday, April 13.

USD/JPY: Japanese Are Against A Weak Yen

We titled our previous review as “125.09: No More Anti-Records?”. After a week, we can say that not yet, there will not be. And although the USD/JPY pair was moving north for a while, it fixed a local maximum at 124.67 this time, and ended the trading session at 124.36.

Recall that due to the super-soft monetary policy of the Bank of Japan, the yen continued to weaken, and the USD/JPY pair reached a record multi-year level of 125.09 on March 28, which is not far from the 2015 high of 125.86.

There are no expected releases of any important statistics on the state of the Japanese economy this week. The only thing that can be noted is the speech of the head of the Bank of Japan, Haruhiko Kuroda, on Wednesday, April 13. But it is unlikely to pull on a sensation. Although here one should take into account the statement of Hideo Hayakawa, the former chief economist of this organization, that against the background of the weakening yen, the Japanese Central Bank may adjust the parameters of monetary policy in July. “While the Bank of Japan has repeatedly said that the weak yen is positive for the economy as a whole, in reality this impact is close to 50/50, and household discomfort will increase further as inflation in Japan rises as well. The vast majority of Japanese do not welcome the weak yen,” Hideo Hayakawa said on April 8. In his opinion, "it is too naive for the Bank of Japan to say that a weak yen is good when the government takes measures to solve the problem of rising prices and limiting gasoline prices."

Strategists at Rabobank also believe that a quick USD/JPY jump above 125.00 increases seriously the likelihood that the Japanese regulator will revise its quantitative easing (QE) program. At the moment, the probability that the pair will try a second test of resistance in the 125.00-125.09 area is estimated as 50/50. However, when moving from a weekly forecast to a forecast for the second half of April and May, the vast majority (85%) of experts predict the strengthening of the Japanese currency and expect to see the pair in the 115.00-117.00 zone.

Cryptocurrencies: Correction or the Beginning of a New Collapse

According to Raul Pal, the macroeconomic situation suggests that the chances of another bitcoin sell-off are slim. Therefore, most market participants are likely to stick to a long-term strategy and not actively trade cryptocurrencies. However, digital gold stopped rising after reaching a high of $48,156 on March 28. The bulls have not been able to push the BTC/USD pair above the 200-day moving average, and at the time of writing, on the evening of April 08, it is trading around $43,000. The total market capitalization is below the important psychological level of $2 trillion, having fallen from $2.140 trillion to $1.985 trillion during the week. The Crypto Fear & Greed Index also began to feel worse, falling from neutral 50 to 37 points, which are already in the Fear zone.

Renowned analyst and trader Cheds views the ascending triangle that has been forming since January 24 as a bullish sign. Such a triangle, he says, is usually a bullish continuation pattern. And in the event of an upside breakout, “the measurable move will be the height of the triangle, which will bring from $56,000 to $58,000.”

At the same time, the expert advises traders to keep a close eye on the 200-day moving average as this technical indicator is currently acting as resistance. Chads believes that if the bulls manage to keep BTC above $45,000, the cryptocurrency will be ready to storm the SMA-200 resistance for a further 26% gain. Otherwise, the bulls face the risk of a sell-off. 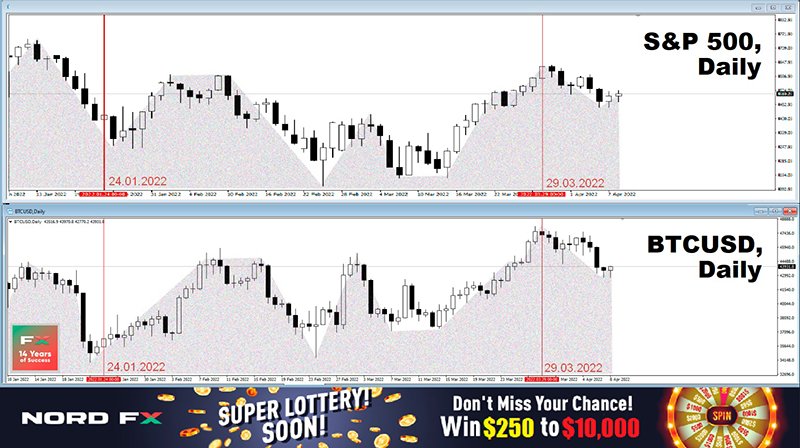 As mentioned, BTC/USD is currently trading at $43,000, below Cheds' support. However, given the volatility of the flagship cryptocurrency, the victory of the bears cannot yet be considered complete. A breakthrough to the south may be false. Moreover, bitcoin has ceased to be independent. It was in 2010, when 10,000 BTC could buy two pizzas, when it lived its own life. Now it has matured and become part of the global economy. Bitcoin is now showing an almost complete cyclical correlation with the S&P 500, which has recently hit 0.9. And it falls after the US stock market. And the latter, in turn, depends on the risk appetites of global investors.

If the craving for risky assets recovers, the crypto market will also go up. Otherwise, according to some experts, we can expect the BTC/USD pair to decline to March lows near $37,000 per coin. The probability of quotes falling even lower, to $30,000, is also quite high.