The much obsessed about psychological level was tagged today. We haven't seen a follow through to decisively breach 1 just yet, but it looks like the higher probability scenario. It’s been a one-way move south for EURUSD as 2022 got underway. The euro has depreciated by over 11% against the dollar since the beginning of the year. The market obsession with parity came true today, with the euro reaching levels last seen in November 2002. Now that parity has been reached, many are asking what next? Well the initial short-term reaction seems to have been an oversold bounce as traders square up positions and take some profits. Additionally, there is some sizable option strikes sitting at parity, leading to a bit of a price barrier.

How did we arrive at parity?

In order to form a bullish or bearish view on the euro’s prospects going forward, it’s important to dissect the factors responsible for driving EURUSD. Before we get onto euro specifics, I want to talk about the dollar briefly. The US economy remains the most resilient relative to the eurozone and others within the G10 universe. The cost-of-living crisis and impact on households seems far more pronounced in Europe and the UK. With global recessionary clouds rapidly forming, USD is the default portfolio hedge and therefore benefits from safe haven flows. There is a theory known as the ‘dollar smile’ - we’re currently sitting on the left-hand portion of the smile, which sees the dollar appreciate due to global growth fears/risk-aversion. My colleague, Chris Weston, wrote a great piece on the drivers of the dollar here. 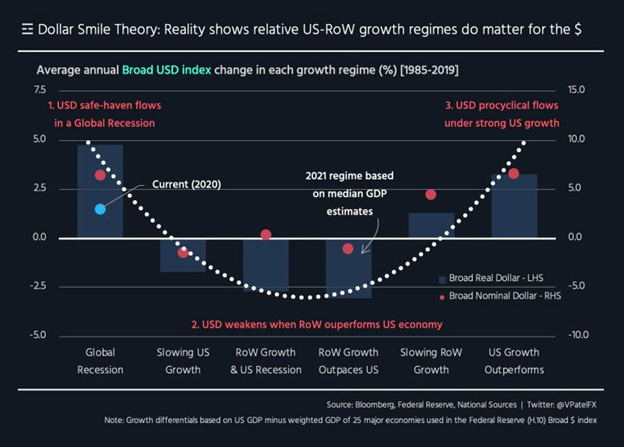 Now that we’ve got the dollar story out the way, let’s get onto specific factors relevant to the euro. Without a doubt the main overarching factor driving EURUSD to parity has been the parabolic rise in energy prices (12% away from highs).

They have a target of 0.95 on a more benign scenario, where the market prices in around a 50% chance of gas flows not being turned back on. Under an adverse scenario, where the market fully prices this outcome, then 0.9 is the level which they see EURUSD tumbling to. Positioning data for speculators and leveraged positions (hot money), is only marginally net short (-16.9k contracts - height of covid saw -114k), which means that there is room for an expansion in short positioning to build and apply further pressure to the currency.

One of their biggest markets, China, have also been suffering with covid breakouts. This has dampened demand for the eurozone’s products. The ZEW Economic Sentiment Index in Germany, which shows analysts’ economic outlook over the next 6-months fell to -53.8 (way below what was expected at -38.3). To give some perspective on how negative this is, the index is now below covid 2020 levels and close to 2011 sovereign debt crisis levels. The euro is also a pro-cyclical currency, meaning when global growth fears ramp up the currency is hit. This has led to a complete revaluation of the eurozone’s economic prospects and subsequently expectations for the European central bank’s (ECB’s) policy rate.

Markets now see 1.35% of hikes through to 2022 as opposed to 1.9% around a month ago. I think this repricing lower will continue as it becomes clear the window for aggressive tightening is closing as growth slows. German 2-year government bond yields are seen as a proxy for the ECB’s bank’s policy rate and have been battered lower. This has led to a widening of the interest rate differential with the US (see below chart), which will continue to be a headwind for the euro from a carry perspective (borrow in low interest rate currency to invest in higher interest rate currency). The ECB is also trying to juggle the twin issues of dealing with inflation via higher interest rates and fragmentation risks (spreads between German and Italian bond yields increasing, raising fears over a debt crisis 2.0). If they disappoint the market with their new tool at the 21 July meeting, then the euro could be in big trouble.

What could see the euro rebound?

Although, I lean bearish for the above mentioned reasons, one does need to be open-minded and flexible for any change in conditions. To become bullish, what I’d want to see is the fragmentation risks addressed properly, a hawkish ECB rate path (interest rate differential narrowing with dollar), lower energy prices and gas flows back online post 21 July and lastly China injecting a fiscal booster shot into the veins of the Chinese economy.

A decisive move below parity could see a wave of forced selling as stop losses are triggered. The trapdoor lower could really open then. 0.95 seems to be the next major level on the downside. Wednesday's US CPI number could be the catalyst for the EURUSD to revisit parity.

The World Bank said last week that risks of a recession in 2023 are growing amid simultaneous tightening of monetary policy by the world's leading Central banks and the energy crisis in Europe...

Gold gains traction on the back of weaker dollar

The precious’ recent rally from its near year-to-date lows could be attributed to the broader dollar weakness observed in the past week, even though it remains elevated near its 20-year highs...