The 22nd education of the FIFA World Cup is scheduled to take place this year in Qatar from 20 November to 18 December 2022. This marks the first-ever World Cup held in an Arab nation and the second time held in Asia. Sponsorships and partners of the FIFA World Cup are bound to gain huge exposure. According to audience data from the official broadcast coverage of the 2018 FIFA World Cup, a total of 3.572 billion people – more than half of the global population aged four and above – watched the 2018 tournament.

This shows how much exposure the brands and companies will get from their sponsorship and partnership deals. Here are three stocks to look out for during the FIFA World Cup 2022.

How does the FIFA World Cup Affect Stock Prices?

During the football season and major events, companies that are either official sponsors, partners or manufacturers of products that are in demand during the period are likely to gain more exposure than usual. The host country of the competition will expect an influx of football fans. Millions of visitors from all over the world are expected to flock into the host country to support their team in the competition. This will bring in more business activities and help boost the host country’s economy in the short run. Hotels have probably the best on-the-ground positioning to take good advantage of the top prices charged during the sport event. This, in turn, may lead to a potential rising of hotel’s stock prices as earnings are likely to be uplifted in this particular period of time.

On a separate note, when brands and companies take part in sponsorship and partnership with the FIFA World Cup, their branding could receive huge exposure which could lead to a surge in demand for their products or services. However, FIFA World Cup sponsorship often comes with high costs and there is no guarantee that exposure will convert into revenue in the short run.

The FIFA World Cup might also affect publicly traded football clubs on the stock market. When a professional football player wins or performs well in the tournament, it could potentially influence the share value of the player’s football club.

3 Stocks To Look Out For During the FIFA World Cup

Here are 3 stocks to look out for during the competitions:

Coca-cola is one of the longest partners of FIFA. The company has been an official sponsor since 1978. Their partnership will last through 2030, supporting the broad spectrum of FIFA-organised events around the globe, including FIFA’s Youth and FIFA’s women’s and men’s tournaments.

With zero tolerance for drinking in public and being drunk in public being a crime in Qatar, Coca-Cola could potentially benefit from the sales of its products during the matches. Perhaps more people will be having a coke in hand as only non-alcoholic beer and soft drinks will be available inside the World Cup stadium.

Here’s a look at Coca-cola’s chart over the last year. 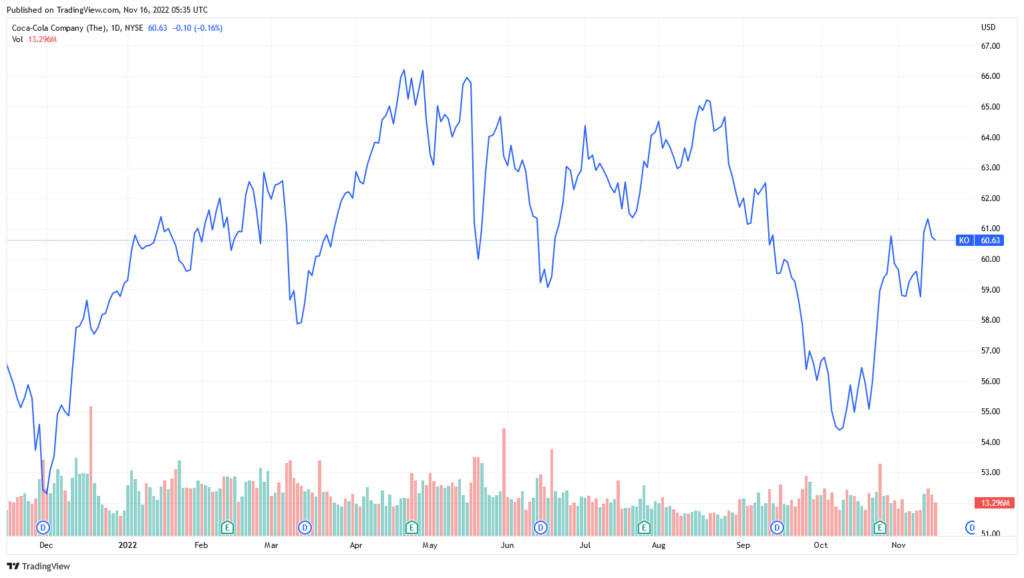 Adidas has been the supplier of the official match ball for all FIFA World Cup matches since 1970. Here’s an image of the official match ball. The Three Stripes is also one of the leading manufacturers in boots, ball, and apparel technologies. Football is one of Adidas’ key strategic priorities due to it being one of the most popular sports worldwide.

By building on the success around the major sporting events, Adidas has become one of the global leaders in football by partnering up with and sponsoring some of the world’s top clubs. Through the FIFA World Cup, Adidas could further bolster its interest in football products  and boost retail sales.

In addition, if the winning team is a team that Adidas sponsors, they could capitalise on the sales of replica jerseys as the demand for the winning team jersey is likely to increase. For example, in 2014, Adidas reported a sale record of 14 million official match ball and 8 million jerseys, which includes 3 million for the winning German team.  Here’s a look at Adidas’s chart over the last year. 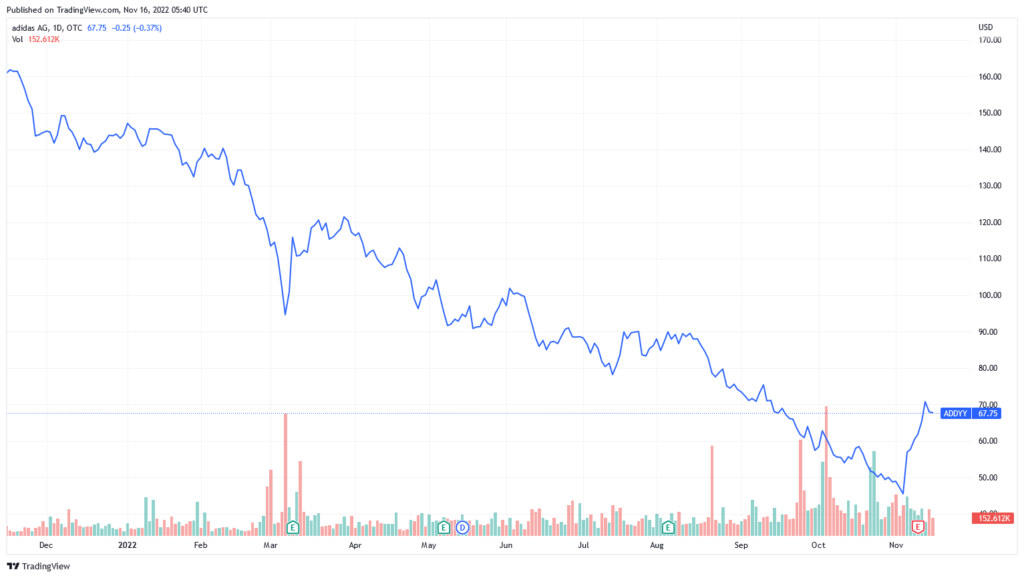 In 2010, Hyundai and Kia signed a long-term agreement to continue the partnership until 2022. This sponsorship package includes comprehensive rights for all FIFA competitions [6]. As one of the key components of Hyundai and Kia’s global marketing strategy, these football partnerships aim to engage emotionally with customers by sharing their love of the game.

An international event like the FIFA World Cup must be successfully staged, and ground transportation is essential. The flawless administration of such a sizable event is inconceivable without a sizable fleet of contemporary vehicles. Hyundai and Kia will again play a significant role as the official ground transportation provider until 2022 after establishing themselves as the vehicle supplier for several FIFA events from 2006 to 2018, including the FIFA World Cup tournaments. 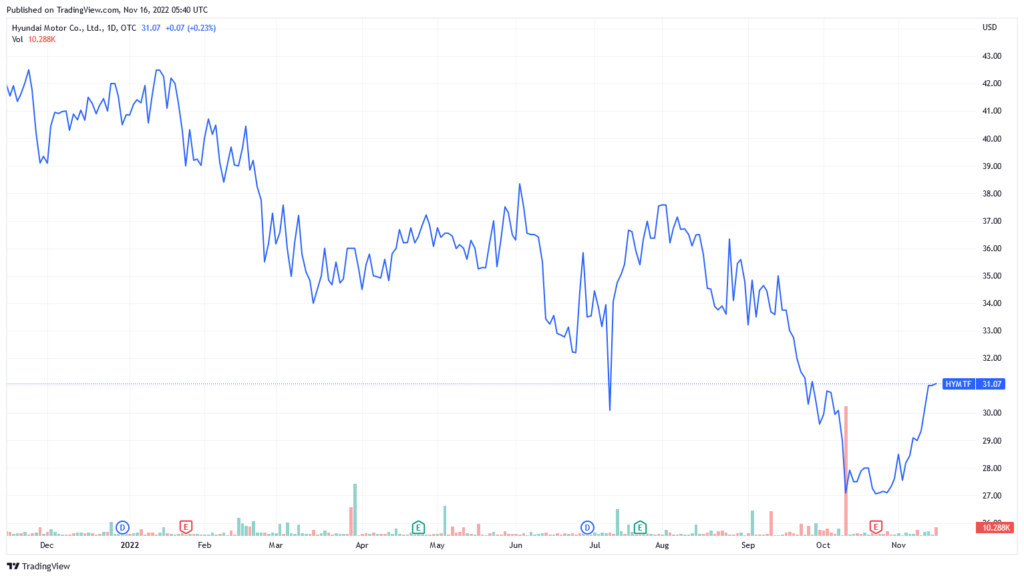 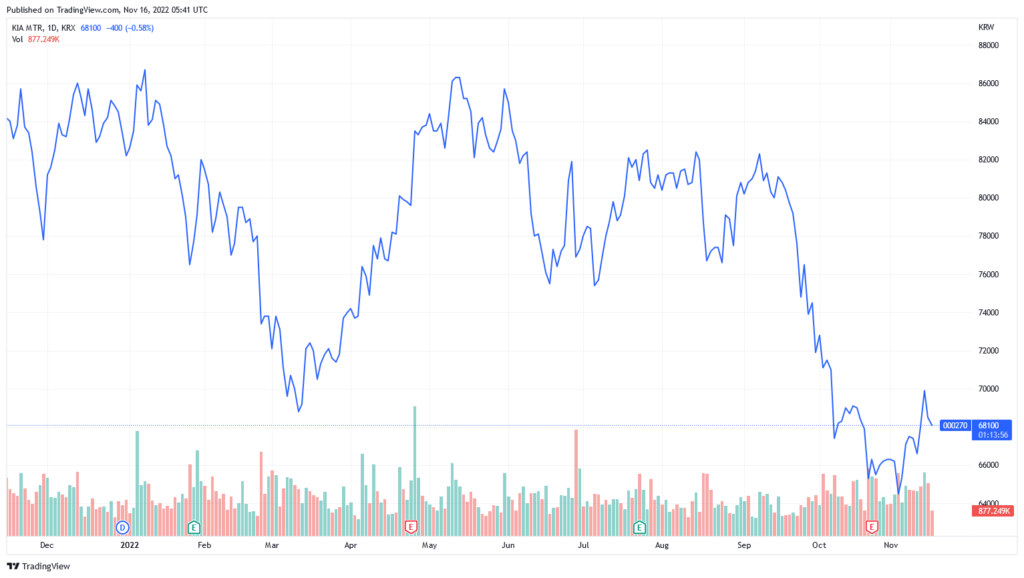 Should You Invest in World Cup-related Stock CFDs?

The FIFA World Cup is one of the biggest sporting events for companies to market their business to the global audience. There will be plenty of opportunities in the markets for you to explore in the coming weeks. However, the Company is not endorsing, recommending or otherwise involved in providing any advice to invest in any particular securities, including the aforementioned companies. The content of this article is shared in for educational purposes only.  Please read the disclaimer carefully and trade at your own risk. Past performance is not an indication of future results.

Ready to get started with CFD stock trading? Open a live account with Vantage in less than five minutes to start trading. All Vantage clients enjoy $0 commissions when trading US stocks, so start trading away with a Live Account today!

If you’re not quite ready, hone your skills by practising with a demo account before you take it to the actual playing field with real cash. You can also experience the football craze by joining the World Cup competition in our mobile app and vote for your favourite teams to earn up to USD$600.

Santa Rally: Your Christmas Gift From The Stock Market

Christmas is a religious holiday that has evolved into a cultural and commercial celebration with tales of Santa Claus delivering presents on a reindeer-pulled sleigh through the night sky...

One of the largest and most famous banks in the world is Citigroup, headquartered in New York City… at least, for now. There have been some employee movements...

XAU/USD upside appears more compelling ahead of US NFP

Oil’s correction in rumors about further production cuts by OPEC

The price of Crude oil resumed the downward movement after failing to cross above the daily trendline which was valid since late June.The price only rebounded to the upside...

Before getting down to analyzing why Euro reminds of a mafia victim in cement shoes falling off a Chicago bridge, allow us to open it up with a meme joke that best describes this whole ordeal...

Is Boeing stock about to take off?