One of the largest and most famous banks in the world is Citigroup, headquartered in New York City. at least, for now. There have been some employee movements recently that begs the question, are they sneaking out of the US and, if so, how will it affect their performance and stock price? Citigroup Inc, provides bank and financial services to small-scale enterprises as well as large corporations. Citigroup is a worldwide banking institution and the third-largest in the United States, behind JPMorgan Chase and Bank of America. In 2020, it was one of the largest securities services providers with over $23.6 trillion under custody. As of 2021, Citigroup was ranked 33rd on the Fortune 500 with over 200 million customers across 160+ countries.

Citigroup job figures had been falling for 8 years before a reversal began in 2020. 223,400 employees fly the Citi flag worldwide, but it’s been shedding US employees from its investment-banking operations recently, and nobody is saying why. This is not a cost cut, since hiring is still rising from the 2019 lows.

It’s not a secret that Citigroup is planning to expand in the Middle East and Africa, with plans to add more Arabic speaking individuals by the end of the year. Citigroup Inc. is already aggressively building an investment banking team in the UAE and Saudi Arabia. In just two years, they have doubled their presence, joining several other firms seeking to take advantage of the red-hot Gulf IPO market. This hiring initiative will be centered in Saudi Arabia and the UAE, and marks a turning point for the 110 year-old US company.

Why move to UAE?

The volatility that once spurred growth for trading desks is now weighing on capital markets and asset management, and has caused investment banking fees to plummet in the US.  Citigroup’s investment banking revenues of $631 million decreased by 64%, as a result of recent uncertainty, volatility, and strong economic impact on its client activities.

In contrast, the revenues of UAE banks are set to increase by about 52% to $25 billion, thanks to a digital transformation. The Emirates' banking system will likely remain stable in the long term, and the effects of financial technology are clear over the past year's trends.

About 95% of banking transactions in the UAE are now digital, with mobile banking comprising over 90% of activities. 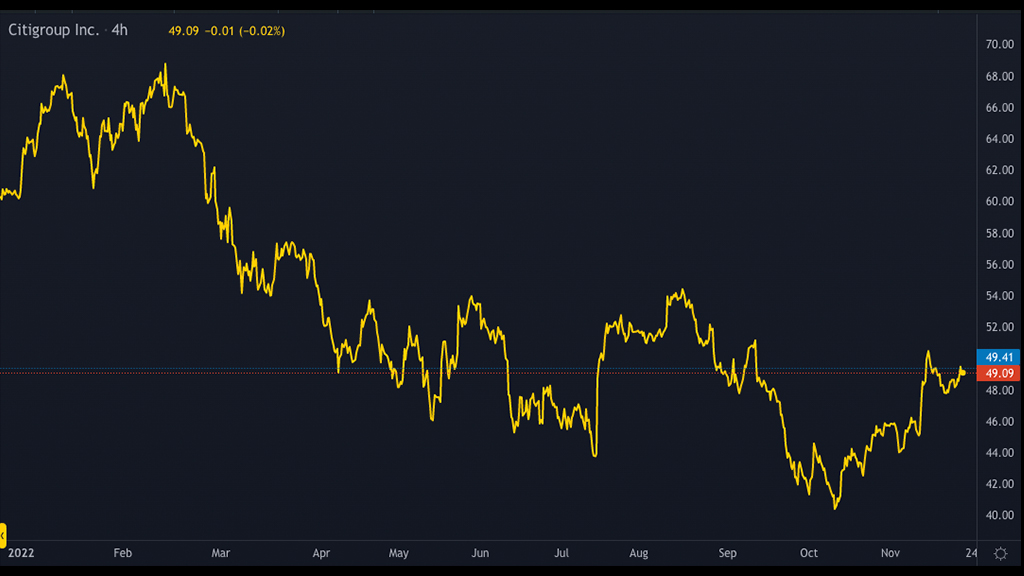 An undisputed top financial hub in the Middle East, UAE is one of the top seven, and has invested heavily in technology to help boost revenue and keep pace with an economy that is undergoing a rapid digital transformation. And Citigroup is right in the middle of it.

Should you trade Citigroup?

Citigroup is already a powerhouse in the banking sector. While stock prices fell, like so many, at the beginning of the year, the October rise has reached the upper part of the bearish channel, so it’s anyone’s guess what will happen in the next few days and weeks – technically speaking. From a fundamental perspective, investors have been eager to buy shares of publicly traded companies in the Gulf region this year. The stronger oil prices, a result of global supply and demand, and government-led privatization programs have helped fuel the growth.

This year, Gulf issuers have raised around $16 billion in initial public offerings (IPOs). This is roughly half of the total proceeds from Europe, the Middle East, and Africa.

The growth of Gulf equity capital markets is in sharp contrast to the stagnation experienced in North America and Europe. That's because, while global banks are reducing their headcount, Gulf industries are developing rapidly. If you are thinking of trading Citigroup stocks, there are plenty of reasons to expect some hot moves and sunny skies, but it might not happen immediately, and there will be volatility on the way, especially when the cat climbs out of the bank bag and Citigroup’s 2023 plan is confirmed publically.