US stimulus deal hangs in the balance

The US stock market has faced a choppy first half of the week as US Lawmakers negotiate the next stimulus package. There have been conflicting stories coming out from both sides. Nanci Pelosi, Democratic House Speaker has stated there is still time for a deal to be struck and both sides are coming closer to an agreement. Whereas McConnell, the Republican Senate Majority leader has warned the White House not to take the deal as Pelosi is operating in bad faith, attempting to complicate Trump’s Supreme Court nomination, Amy Barrett.

The self-imposed deadline is fast approaching, and the markets are craving further stimulus or threatening to sink lower. Will Nanci Pelosi come through and sign the agreement?

McConnell suggests she is stringing the Republican party along, therefore we are possibly looking for a rug pull at the last moment. If a deal fails to materialise both sides could blame each other going into the elections. From a traders perspective, an ideal scenario would be for a no-deal, the US stock market would sink lower providing a potential buy the dip opportunity coming out of the elections.

We do know that a second stimulus package is on its way, it is just a matter of when and how large. Markets may remain range-bound until any further news presents itself.

The FANG stocks, the major market movers (APPLE, AMAZON, GOOGLE and FB) are showing potential bullish structures (BULL FLAGS). A break above the bull flag could bring the rest of the US stock market higher for a final push into the elections. The FANG index is also trading between a falling wedge/bull flag. These big hitters have provided a safe haven for investors as tech stocks weathered the Covid-19 storm. Will they provide another opportunity heading into the elections?

It all hangs on a deal being reached between the two parties. This week could be a make or break scenario. 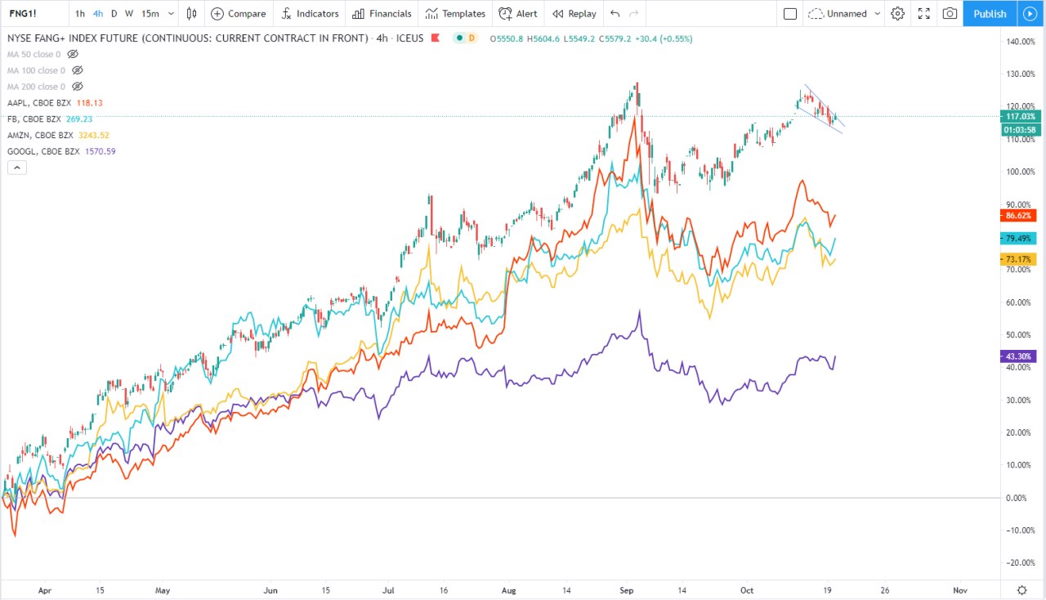 US inflation under the microscope

With the Fed having almost locked in a November taper announcement, the question now is whether Chairman Powell will use next week’s policy meeting to give the markets...