Risk on the defensive

The mood in markets is pretty subdued after two days of losses in stock markets and US futures pointing to another day in the red, even after bumper earnings reports by two of the major US retailers, Walmart and Home Depot. European bourses are nursing losses of over one per cent as risk sentiment is put in the shade by lingering inflation fears.

Bitcoin has caught the headlines this morning after falling below $40,000. Two weeks ago, the world’s most popular cryptocurrency was trading close to $60,000 but Elon Musk’s “did he or didn’t” (sell Tesla’s holding) tweet plus a China ban on financial services offering crypto services has hurt the crypto. Prices have just bounced off the widely watched 200-day SMA. 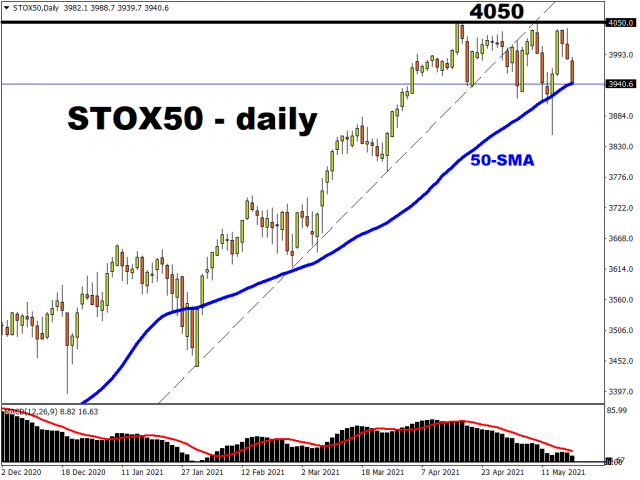 This current cautious environment is generally good for the dollar which has halted the run of four days of losses so far today. The downtrend from the end of March peak is strong though, with the FOMC minutes released later today not expected to upset markets a great deal. The focus is on interpreting the Fed members’ thinking on the upbeat economic picture and the current assessment of “transitory” inflation drivers. Notably, this April meeting saw Chair Powell state in the press conference that “now is not the time to talk tapering” so the dollar may have a tough time looking for many positives in the minutes. 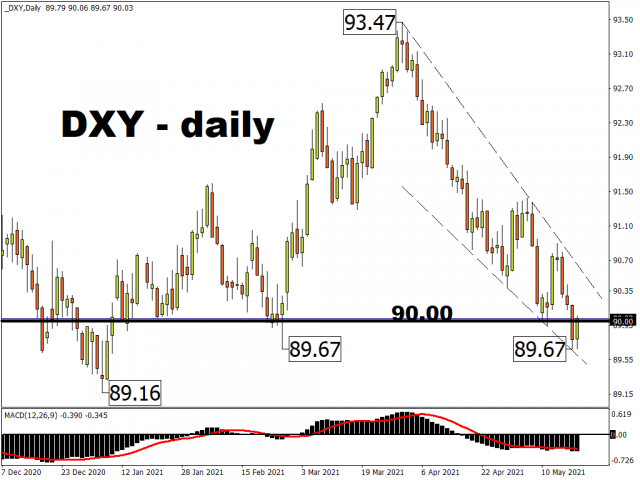 It’s those “base effects” again…

UK inflation data jumped this morning with the headline more than doubling to 1.5% from 0.7%. For sure, energy prices were helped by the regulator lifting the household cap, but the increase was well known, like in every country’s CPI figures. Going forward, energy prices and reopenings are expected to push inflation higher in the coming months. Wage pressures will also be important as the jobs market comes to terms with the ending of the furlough scheme in September. 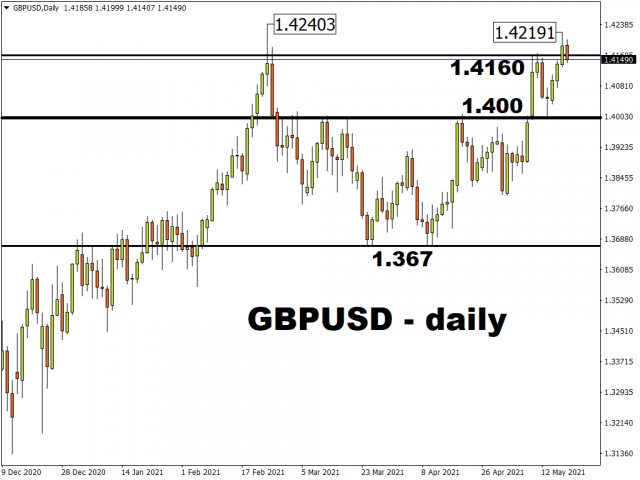 GBP/USD had enjoyed three days of gains, propelling it to levels not seen since February. Bulls would like to hold onto last week’s highs around 1.4160 but the bounce from the more important 1.40 support mark should stay the course.

European markets trading higher after the Fed delivered another lesson in how to gently massage markets into accepting that tightening is on its way. The FTSE 100 has...

Hawkish Fed brings out the bulls as dollar and stocks rise

The Federal Reserve took its biggest step yet towards scaling back its pandemic stimulus on Wednesday following the conclusion of its two-day policy meeting...

Trading the BoE and FOMC meetings

The FOMC and the BoE meeting are firmly in our sights now, and positions and exposures will need to be managed accordingly. Certainly, the FOMC meeting could...