At the start of this trading week, the USD index formed a "golden cross", whereby its 50-day simple moving average crossed above its 200-day counterpart. Such an event typically suggests that more gains are in store. However, also on Monday, this index completed an "evening star" which is a bearish, three-candlestick pattern that usually denotes the reversal of a trend. Faced with these seemingly conflicting technical indicators, the question facing traders now is, "where to next for this USD index"?

The greenback has been on an uptrend since that May-June trough, fueled by expectations that the US Federal Reserve is closer to easing up on its asset purchases that have supported financial markets since the pandemic. This process of paring back its quantitative easing programme is also simply known as "tapering".

As the Fed buys less bonds, prices are expected to fall and their yields should then eventually rise. When yields rise, that should bring the US dollar along with it, hence the uptrend.

Markets are currently forecasting that the tapering process could be completed by 4Q 2020 which would then pave the way for a US interest rate hike. As Fed officials had indicated during their June FOMC meeting, we could see interest rates being raised twice in 2023. That caught markets by surprise and triggered a climb of more than 3% for this index since that June policy meeting, even after taking into account the recent pullback. Such prospects for tapering to happen sooner rather than later have far-reaching consequences across various asset classes, influencing how much money flows into tech stocks vs. cyclical stocks, or bonds, and even gold. 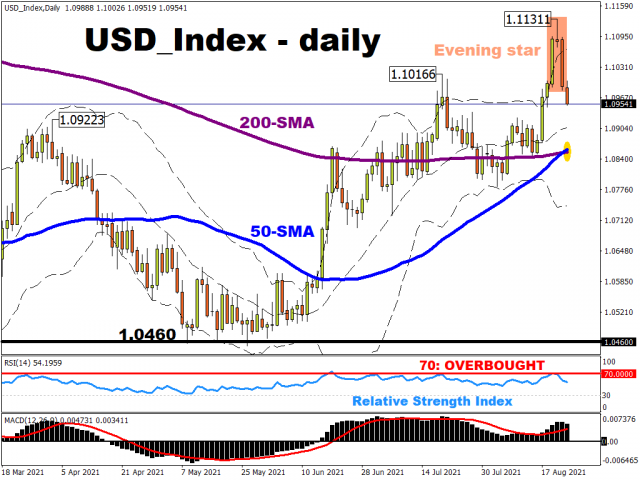 Markets could get next major cue on tapering this Friday

Amid such a narrative, investors and traders worldwide will be closely monitoring what Fed Chair Jerome Powell might say about the central bank's tapering timeline, if he mentions it at all, this Friday. Powell is scheduled to deliver his highly-anticipated speech virtually at the Jackson Hole Economic Symposium, the Fed’s flagship event. Should Powell urge for more patience before embarking on the tapering process, that could prompt the US dollar to unwind more of its recent gains. The prior cycle high around 1.090 should then offer support, followed by potentially stronger support around the site of the 'golden cross' of 1.085.

However, should Powell align closer with the hawkish chorus among Fed officials who are signaling that tapering is closer at hand, that could spur the US dollar onto fresh year-to-date highs. Dollar bulls are likely to eye the 1.12 mark which served as the support region for this USD index back in October 2020, provided this index can breach the 1.11 line once more.

Ultimately, it could be down to how strong a signal Powell sends during his Jackson Hole speech. It could turn out to be a non-event, as some segments of the markets believe. However, seasoned market watchers would only know that all it takes is just one word and that could be enough to jolt markets worldwide.

Where to next for the US dollar?

Going back to the technical perspective, note that this USD index has now pulled back from overbought levels and is trading back within its Bollinger band. Its 14-day relative strength index has also moderated back into the  sub-70 region (prices are said to be overbought when the RSI has hit or breached the 70 mark). Such indicators suggest that some of the froth has been cleared out of this USD index, leaving it poised to climb higher if indeed Powell’s words this Friday point markets in that direction.

In summary, I expect the US dollar’s uptrend to remain intact, as long as the Fed doesn’t abruptly back away from its intentions to taper.