The USDJPY currency pair on the D1 time-frame was in a down trend until July 31 when a lower bottom was reached at 104.177. The appealing price of 104.77 attracted buyers and subsequently the bears were overthrown with the price then propelled upwards and the momentum caused the market to eventually breach both the 15 and 34 Simple Moving Averages. The Momentum Oscillator also crossed the zero baseline into positive territory. This is an indication to technical traders that a possible new new uptrend is in progress. 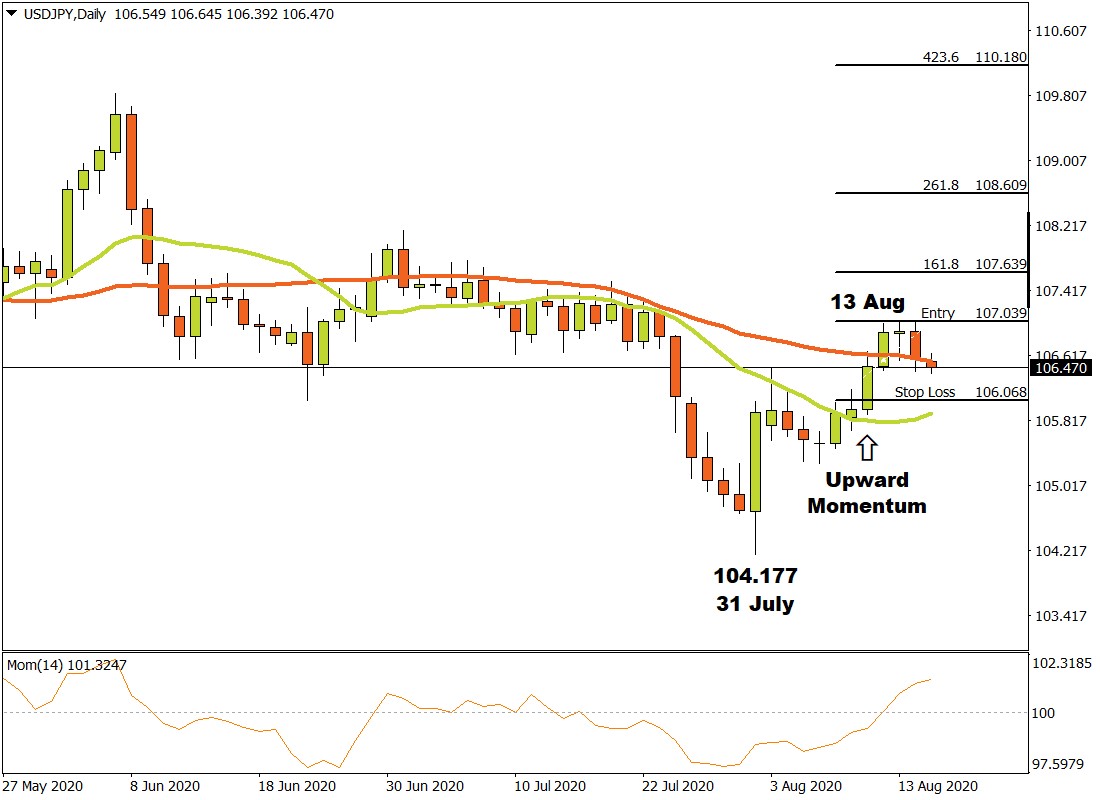 A higher top and possible critical resistance level formed on August 13 at 107.039 and bears are currently trying to exert pressure to the USDJPY pair. If the pair breaks through the critical resistance level at 107.039, then three possible price targets may be calculated from there. Applying the Fibonacci tool to the top of the resistance level at 107.039 and dragging it to the bottom of a possible support level near the 15 Simple Moving Average at 106.068, the following targets could be considered. The first target can be projected at 107.639 (161 %) and the second price target might likely be at 108.609 (261.8%). The third and final target may be expected at 110.180 (423.6%) if the uptrend continues.

If the 106.068 support level is reached, the bullish scenario above are invalidated and will need to be reassessed.

As long as buyers maintain a positive sentiment and demand overwhelms supply, the outlook for the USDJPY currency pair on the Daily time-frame will remain bullish.

USD/JPY sticks to its consolidative theme

USD/JPY remains side-lined for the time being, note FX Strategists at UOB Group Lee Sue Ann and Quek Ser Leang. Yesterday, we highlighted that ‘upward momentum has slowed and USD is unlikely...

USD/JPY stages a goodish bounce from a multi-week low touched earlier this Friday. Recovering US bond yields help revive the USD demand and offers support to the pair...

The Yen updated the lows

USDJPY reached new highs – the “greenback” continues to get stronger. The Japanese Yen plunged against the USD. The current quote for the instrument is 137.02. A new high for the pair is at 137.28....

The Yen may drop

USDJPY is preparing a new attack on the highs. The Japanese Yen is slowly falling against the USD. The current quote for the instrument is 136.16. The statistics published...

USD/JPY recovered a few pips from the daily low, though lacked any follow-through buying. Ascending trend-line breakdown and failure near the 200-hour SMA favours bearish traders...