How to Make Profit with Stop Losses

The international currency market quickly gained its popularity due to the possibility of active use of borrowed funds (leverage) by traders. In financial markets, standard leverage is only 1:2; in the options markets - 1:10; in the futures markets 1:20. In the Forex market, leverage can reach values of 1: 500, which allows traders to rely on potentially high profits.

For example, in the futures market, a trader needs to have $2500 to manage assets in the amount of $ 50,000, and in the Forex market - only $ 500 or even $ 100. However, the ability to use large leverage carries significant risks that can lead to a full loss of traders’ capital.

A Forex trader can literally double his capital or lose everything in a matter of hours if he uses the maximum available leverage. Most professional traders prefer to adhere to a leverage of 1:10 and avoid excessive risk. It does not matter what leverage is used for trading –  the general rule of a successful trader is the mandatory designation of stops. In this article you will learn how to avoid placing stop-losses in the zone of attention of large players.

The basics of using stops

The active use of borrowed funds in Forex forces the majority of clients of brokerage companies to use stop-loss to limit financial damage and maintain the possibility of further participation in trading. The strategy of clinging to a falling asset in hope it will skyrocket again, actively used by stock market participants, is not suitable for traders in the Forex market. Ignoring the stop loss results finally in the margin call.

Most Forex traders are speculators and are not able to withstand bearing losses due to the use of leverage. Leverage and widespread use of fairly standardized stops caused the emergence of a strategy “breakdown of stops” by large players.

Despite the negative attitude towards this trading practice on the part of the majority of market participants, it is completely legitimate.

As part of this strategy, large speculators push prices to the stop loss levels in hope of triggering them and then forming a strong price movement. The strategy is so often used in practice that almost every trader from time to time becomes its victim and suffers losses.

Since the human brain requires ordering, most of the stop losses are set by traders in the area of integer price levels. For example, if EUR/USD is trading at 1.2470 and growing, traders set stops a few points higher than 1.2500, and not in the area, for example, 1.2526. This fact is of vital importance and demonstrates the need for retail traders to use less typical and common levels for stop losses. However, more interesting, from the point of view of the trader, is the possibility of making a profit from the directional movement, formed as a result of the “breakdown of stops”.

The strategy is described in great detail in Katie Lien’s book “Intraday Trading in the Foreign Exchange Market”. Katie tells readers about the possibilities of joining a short-term trend in the event of a “breakdown of stops” during the passing of integer levels.

To benefit from the situation of “breaking stops” is quite simple – nothing is needed except the price chart and one indicator.

Example: on the hourly chart, draw lines 15 points above and below the integer price level. For example, if EUR/USD approaches the value of 1.2500, you need to mark the levels of 1.2485 and 1.2515. This range is called “trading level”, that is, market participants have a high chance of making a profit if prices are in this range. The idea is simple – as soon as the price approaches the integer level, speculators will try to “disrupt” the nearby stop.

Since the Forex market is decentralized, no one knows the exact number of stops at a given price level, however, traders can expect that breaking through one level will lead to an avalanche-like breakdown of other, more distant levels, as a result of which price will “accelerate” in this direction.

Thus, in the case of an upward movement of EUR/USD in the direction of 1.2500, the trader takes 2 long positions at the level of 1.2485. Stop-loss should be located at a distance of 15 points from the entry point. If the price does not immediately pass 1.2500, the probability of a breakthrough of this level is significantly reduced. The target profit level for the first position is 1.2500; after passing this level, the trader moves the stop in the second position to the break-even point, thus fixing the total profit.

Since this strategy is based on the use of trading impulses, the trader should open positions only in the direction of the main trend. There are many technical analysis tools for determining the trend, however, in this case, the most effective indicator is the 200-period simple moving average (SMA) imposed on the hourly charts. The use of long periods on short-term charts allows you to correctly identify the overall trend and filter out short-term sawtooth price movements.

Consider a practical example of using the above strategy. 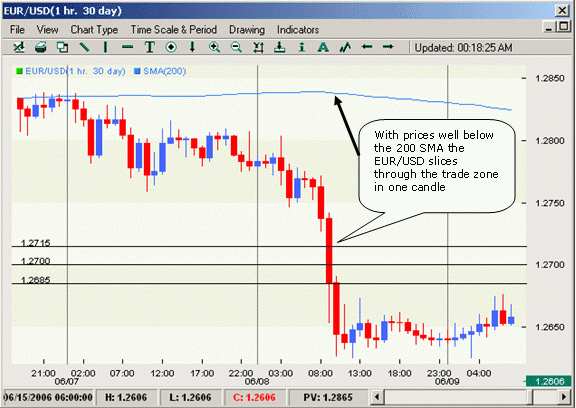 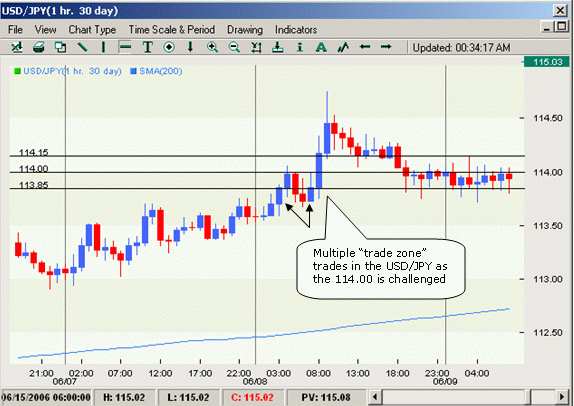 Figure 2 shows several trading opportunities that traders could use on June 8, 2006 for the USD / JPY pair as part of the above strategy. In this case, the pair is trading above the 200-period moving average, so the trader should only open long positions.

The strategy to benefit from the situation of “breaking stops” is one of the simplest and most effective ways to make money on Forex for short-term traders. It does not require anything except attention and understanding of the basics of price movements in the foreign exchange market, it allows private traders to stop being victims of large speculators and start earning with them profits.

Imagine you've thoroughly examined a set of rules and an algorithm of actions that should lead you to a profitable trade. You make sure that every...

The7 Strategy - Grail for Beginner Traders

Among the various trading systems available for free, only a few of them are effective in practice. For the successful application of such strategies, it is enough...

As a rule, it is very difficult to analyze the market using just one indicator. However, there are many facts when different indicators used simultaneously...

Strategy for trading bitcoin in the Forex and CFD market

Cryptocurrency is a new financial instrument that has won traders attention around the world. This tool is different from...

How to make money on scalping?

Many traders who trade on the forex exchange like to use a scalping strategy. Such a strategy involves a series of short-term daily transactions...

Forex trading attracts new players by its unlimited earning potential and deceptive simplicity. After reviewing a trading platform's functionality, it may...

How to develop your signature Forex trading strategy

Trading in the Forex market is a complex daily work that requires great strength, knowledge and experience. Before a trader...

A key aspect of successful trading is an effective trading strategy. Even novice traders know this. However, the development of a successful system of earnings...

This question is probably asked by every novice trader. Almost every information resource on the subject of financial markets provides a separate section...