Gold and other precious metals are widely recognized as an investment asset class, that is why we would like to tell our readers about current trends in the precious metals market and the prospects of its development in today's article.

Why have precious metals attracted investors since time immemorial? First of all, because such metals have value in themselves, as a unit of goods. Stocks and bonds can become unnecessary papers as a result of the stock markets’ collapse, paper money can turn into “candy wrappers” due to the liquidation of the state, antique items can become unnecessary junk under the influence of new trends. And only investments in precious metals cannot fall to zero. Even with pessimistic scenarios for financial markets, an investor may not receive a profit, but remain with goods of value.

It should be noted that not every metal can serve as an object of investment. At first it was only gold. Then silver joined it. Later, platinum and palladium were also included in this list.

The first place in the list of precious metals rightfully belongs to gold, and not only in terms of investment attractiveness. Due to its rare distribution, gold gives its fans special emotions from the awareness of possession. 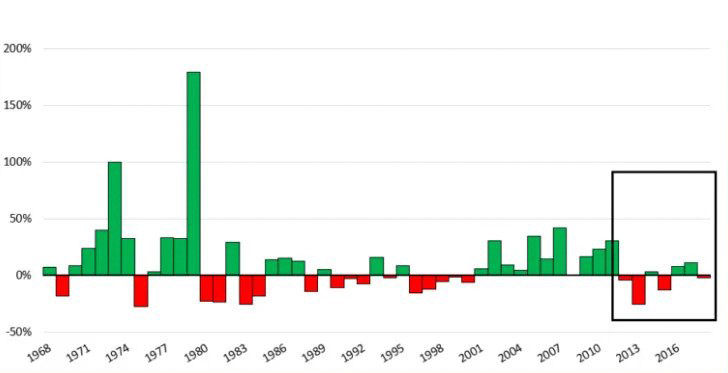 In nature, gold is found in the form of golden sand and, much less often, in the form of gold bars, nuggets. Intensive mining reduces the amount of gold left in the bowels of the earth. According to the US Geological Survey USGS, with existing technologies, we can count on the extraction of just 50 thousand tons of gold more. Note that almost all gold deposits have already been discovered. If mining will occur at a pace that has been observed in recent years - 3.3 thousand tons in 2018 and 2019, then people will extract almost all the gold from the ground in fifteen years.

The rate of extraction of yellow metal is growing exponentially. For comparison, 190000 tons have been produced in the entire history of mankind, and it is planned to produce 50000 tons over the next 15 years. Growing demand stimulates the development of mining industries for the extraction of metal in hard-to-reach areas and the intensified search for new deposits.

The leader in gold mining is China. It is followed by Australia, Russia, the United States and Canada. South Africa dropped out of the list of mining leaders, and Indonesia, on the contrary, got into it in 2019, data is provided by WGC - World Gold Council.

Financial analysts consider the interest of investors in such a metal as silver as underestimated. Its price is much lower than the price of gold, and yet there are a number of reasons to invest capital in this particular asset:

According to estimates by the US Geological Survey, silver reserves remaining in the bowels are about 560000 tons, which may be enough for twenty years of intensive mining. The less it remains in the world, the greater will be its price.

Platinum is one of the rarest metals on our planet. The main deposits are in South Africa and Russia. It is used in medicine, in the manufacture of laser technology, in the automotive industry, radio engineering and in the manufacture of jewelry. More than 40% of the mined metal goes to the production of catalysts in mechanical engineering. Only 6% of platinum is used as investment, mainly to diversify investment portfolios. Despite the fact that it is one of the most expensive metals in the world, its popularity in financial markets is still incomparably lower than that of gold.

Nevertheless, the chart below shows that investments in platinum can bring good returns in long term prospects. 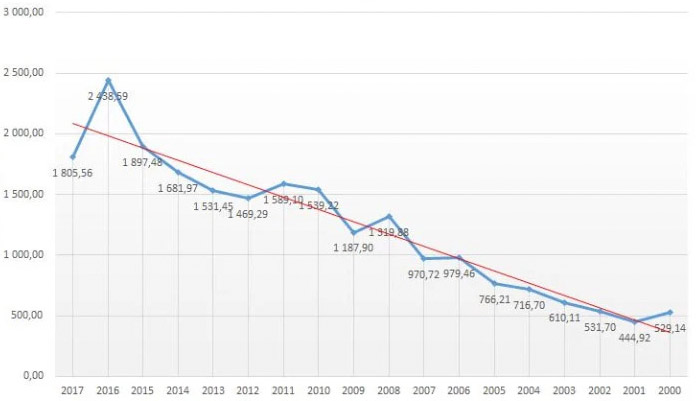 Palladium is mined, just like platinum, in South Africa and Russia, more than 80% of all palladium production is in these two countries. Since no new deposits of this metal have been discovered in recent years, demand for it, which was already high, has increased. In 2019, demand exceeded supply by 600000 ounces, or one and a half billion dollars. The unstable situation in mines in South Africa has pushed the palladium market even more bullish.

The graph of the growth in palladium prices until 2017.

How to invest in precious metals?

The most important aspect that should be considered when choosing the option of investing in precious metals is the fact that such investments are not suitable for short-term strategies. The prices of precious metals fluctuate too much, and making money on the price difference is quite difficult. Nevertheless, the general trend has an upward line, so in the long run it is the most profitable way not only to preserve, but also to increase capital.

You should also pay attention to the fact that gold and silver, as a rule, rises in price during periods of economic crisis and a decline in production. At the same time, platinum and palladium, on the contrary, become cheaper in times of crisis, as they are used mainly in production, the volume of which decreases during a recession in the economy. In addition, the demand for automobiles and the volume of production affect the price of the last two metals, therefore, their prices are more difficult to predict.

If the capital that is supposed to be invested in a precious metal is not too large, it is better to choose a cheaper metal in order to buy a large mass.

For short-term investments, buyers often choose silver because of its greater volatility, and they choose longer-term strategies for gold.

Gold and silver have much greater liquidity than platinum and palladium, so they become an object of investment more often and for a shorter period than the last two.

There are several ways to invest in precious metals:

Please note, that when buying coins, you should remember about non-refundable VAT in the amount depending on the state of residence. In addition, coins are sold with a mark-up set by each bank individually. When investing in precious metal accounts, remember that it is may be impossible to compensate in case of force majeure circumstances because such deposits are not always subject to insurance. And it is better to withdraw funds in cash than in the form of bullions, then you will avoid paying â€‹â€‹VAT.

The coronavirus pandemic has made adjustments to all areas of human activity, including financial. All forecasts previously voiced by analysts have undergone some adjustments. Let's see how the trends in the precious metals market changed this spring.

At the end of April of this crisis 2020 spring, gold was at the peak of the spring maximum, but, with the advent of the quarantine weakening and the revival of financial markets, it began to decline.

Silver, on the contrary, having sustained an “even” period at the end of March and the whole of April, began to rise in price in May, slowing down somewhat in early summer.

Platinum prices “collapsed” in mid-March, then “rose” at the time of massive investment in metals in late March, repeating the story of silver and gold. Further, prices fluctuated slightly, falling insignificantly with the advent of heat and the slowing down of a COVID-19 pandemic wave.

It is rather difficult to make any reasonable forecasts regarding the price dynamics in the precious metals market in the context of the expectation of a second and third wave of coronavirus COVID-19 pandemic. While experts are inclined to believe that the market is saturated, at least with gold and demand will decline in the near future.

The high price of gold stimulates the population to hand over jewelry as scrap. In its study, Heraeus Deutschland GmbH & Co cites figures for a decline in global demand for jewelry - up to 325.5 tons, 65% in China, 41% in India. Gold scrap processing volumes are growing - such a tendency is characteristic of all previous crises, and it remains now. The population gets rid of liquid assets at the time of high prices for them. According to data provided by the WGC (World Gold Council) for 2019, 27% of the annual gold supply in the world is allocated to recycled gold.

Note that gold is not just a high price at the moment. This price is historically high in relation to other goods amid falling prices - oil, copper, silver. Governments around the world have recently taken unprecedented measures of fiscal and monetary measures designed to stabilize the economy. This led investors to gold and gold saturated the market. What to expect next?

Bloomberg analyst Mark Cadmore, in his assessment of the gold market's prospects, compared this metal and its behavior to a difficult teenager and hinted at a bearish trend. “Like a teenager rebelling against the stifling love of his overly-worried parents, gold can upset some investors.” But, any teenager sooner or later begins to grow up and behave more deliberately and steadily, at least until the midlife crisis... We hope that the “golden teenager” will prevail over the hormonal background.

When choosing a third party signal provider for your forex account you need to be careful. Here are a few tips and things to look for when making your decision...

Regular winners of Grand Capital contests sometimes honestly admit to the use of Forex robots. Meanwhile, many participants use contests to test their trading strategies...

Bitcoin is digital money that does not physically exist. However, there are special registers where information is stored about how many bitcoins someone...

Crypto trading: what are cryptocurrencies?

Cryptocurrencies are digital money, which represents a class of assets that do not exist in physical form but are created virtually through computer technology...

Start trading global shares through circus platform, which is a modern and well-developed platform that can assist you in navigating the whole trading process...

Margin and leverage. What exactly is margin trading?

Margin trading refers to trading with leverage, therefore opening up the possibility of a higher ROI. Leverage is a key forex trading term and is explained in the next section...

The Ethereum cryptocurrency is an open software platform based on blockchain technology that allows developers to create and release decentralized applications...

Bitcoin trading: how to trade bitcoin in 2020?

Bitcoin has become an extremely popular financial tool in the past few years. However, not many people are familiar with the basic concepts of this cryptocurrency...

Steps on how to trade Cryptocurrency in 2020

Every country has its own paper or fiat currency which is usually printed and controlled by the national or central bank. This is why forex transactions are important...