How to create a personal trading strategy on forex

Would you rather choose fishing or skiing as a hobby? The answer to such a simple question can help you find the most effective trading strategy.

There are many ways to make money on Forex, but you need to understand your strengths and weaknesses in order to choose a profitable forex strategy. Most clients of brokerage companies are sure that there is “the only correct way to trade” and this is a major misconception! It is human nature to experience discomfort from change, so it is much easier for most traders to accept someone's “right trading strategy” than to find their own as that will surely involve changing and adjusting the strategy continuously.

Fishing and skiing are like trading in the direction of the market and against it. Fishermen are patient, calm and adhere to a certain pattern of behavior. Skiers, on the contrary, love thrills, drive and movement, and try to earn a profit on corrections. However, you should not completely rely on the above models, but just need to take into account your preferences when choosing a forex strategy.

The choice of the time frame is the second question that most traders consider to be of top priority. Usually, traders who prefer to work within the framework of a trend, use medium-term and long-term deals, as the trend develops over a period of months, not days. Traders who trade against the market use shorter time intervals.

As a rule, the most effective way to earn money on short-term transactions is to use hourly charts and target levels of at least 30 points. Target levels of less than 30 points are considered ineffective because the spread is charged to the trader. Take, for example, the most liquid EUR/USD pair in the market, the spread (the difference between the purchase price and the sale price) for which is 3 points.

If a trader sets profit and loss levels equal to 10 pips of the purchase price, he must earn 13 pips (target 10 pips + 3 pips of the spread) or exit through stop after 7 pips (10 pips – 3 pips of the spread). The ratio of profits / losses for such short-term transactions is too low, which virtually destroys the chances of making profit.

After the trader has determined the appropriate time frame, he needs to decide on the type of analysis that will help him make the right trading decisions. There are two main types of analysis: fundamental analysis and technical analysis.

Proponents of technical analysis, in turn, point to the ineffectiveness and inconsistency of fundamental data and argue that any news is taken into account in the quotes of the currency pair, so the graphs can predict future price movements. Which of them is right? No one. Using only fundamental or technical analysis is similar to fighting in a world boxing champion using one hand only.

Fundamentalists may argue that the demand for oil will push its price to $ 100 per barrel and lead to parity between American and Canadian dollars, but if they start selling USD/CAD on an oversold market, when there is a significant divergence between the momentum indicator and the price, they will lose money, even if their prediction ultimately comes true.

On the other hand, a technical trader may sell from the Fibonacci level, but unexpected economic news may lead to an upward price spurt and a breakthrough of several resistance levels. As a result, an open short position causes significant losses.

Despite all the controversies, we can safely say that fundamental analysis is most suitable for long-term positions, and technical – for short-term ones. Major economic events, such as GDP growth, interest rates and the balance of payments, directly affect the trend direction in the long run. Consider, for example, the movement of GBP/USD in 2005 (Fig. 1).

At this time, the Federal Reserve Bank of New York raised the federal funds interest rate by 200 basis points from 2.25% to 4.25%. The Bank of England, in turn, faced a slowdown in the economy and a decline in the consumer sentiment index, and was forced to reduce the interest rate from 4.75% to 4.5%. The difference between interest rates, as a result, became minimal (by 2006, the US and UK interest rates were equal).

Traders who have placed a reduction in the difference between interest rates in the long term, have gained significant profits from the decline in GBP / USD.

The situation with USD/JPY was exactly the opposite (Fig. 2). As American interest rates rose and Japanese remained at zero, the value of the pair rose by 20% over several months. Traders who predicted this development were able to earn significant profits on long-term long trades.

If fundamental analysis is an effective tool for long-term transactions, then technical analysis is successfully used over short time intervals. This can be explained by the fact that news does not affect the course immediately, but gradually - prices are clamped between support and resistance levels and reluctantly break out of this range.

For example, on the hourly chart of EUR / USD (Fig. 3), the price fluctuates between the maximum and minimum values and the trader can make a significant profit by selling from resistance levels and buying at support levels. 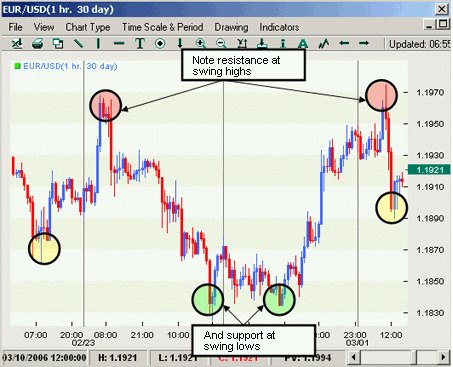 Otherwise, no matter how correct your approach would be, there is room for failure. First of all, the trader needs to understand himself, and not try to guess the market movement.

Imagine you've thoroughly examined a set of rules and an algorithm of actions that should lead you to a profitable trade. You make sure that every...

The7 Strategy - Grail for Beginner Traders

Among the various trading systems available for free, only a few of them are effective in practice. For the successful application of such strategies, it is enough...

As a rule, it is very difficult to analyze the market using just one indicator. However, there are many facts when different indicators used simultaneously...

Strategy for trading bitcoin in the Forex and CFD market

Cryptocurrency is a new financial instrument that has won traders attention around the world. This tool is different from...

How to make money on scalping?

Many traders who trade on the forex exchange like to use a scalping strategy. Such a strategy involves a series of short-term daily transactions...

Forex trading attracts new players by its unlimited earning potential and deceptive simplicity. After reviewing a trading platform's functionality, it may...

How to develop your signature Forex trading strategy

Trading in the Forex market is a complex daily work that requires great strength, knowledge and experience. Before a trader...

A key aspect of successful trading is an effective trading strategy. Even novice traders know this. However, the development of a successful system of earnings...

This question is probably asked by every novice trader. Almost every information resource on the subject of financial markets provides a separate section...