Where will the COVID-19 pandemic lead the United States?

Last week, US government debt set a new historical maximum. The milestone of $25 trillion was taken. The situation deteriorated sharply in April 2020 due to the coronavirus COVID-19 pandemic. This review focuses on the prospects and possible consequences of the debt situation in the United States of America.

The dynamics of the US debt

The United States national debt flies up in full steam. Over the eight years of the Barack Obama’s reign, the figure grew by $9.3 trillion, that is, almost doubled. This was partly facilitated by the Great Recession in the USA at the end of 2007-beginning of 2009, which was softened not only by monetary measures, but also fiscal stimulus.

With the Donald Trump’s advent in January 2017 the situation has not changed much. In 2018, tax reform was launched in the United States, in particular, the corporate tax rate was reduced from 35% to 21%. However, the worst was in 2020.

In April, public debt soared immediately from $23.7 to $25 trillion. This was due to the cost of anti-crisis support for the economy, which the United States naturally turned out to be the largest in the world.

Costs have already exceeded $3 trillion. In late March 2020, a $2 trillion stimulus package was approved, a maximum in the US history. For comparison, the fiscal stimulus package amounted to $800 billion during the 2008 crisis.

$500 billion went to support large companies, including $62 billion for airlines, $350 billion to help small businesses, and $117 billion to support hospitals. Low- and middle-income Americans earned $1200, plus $500 for each child.

At the end of April 2020, an additional package of measures of almost $500 billion was approved. In particular, $320 billion was allocated to a small business lending program.

This is only part of the amount that Congress intends to consider. The total volume of the new support package may be more than $1 trillion. It is likely that as part of the new package of measures, the focus will be on tax breaks that stimulate capital expenditures and business investment. This is especially important for the US oil and gas sector, hit by a fall in oil price.

In addition, Donald Trump is lobbying a $2 trillion infrastructure spending package. This will create additional jobs.

The ratio of the federal debt to the country's GDP (Government Debt to GDP) reached 116% compared to 107% at the end of 2019. Apparently, this is clearly not the limit. Last year, the United States was 11th in the world in terms of this indicator. 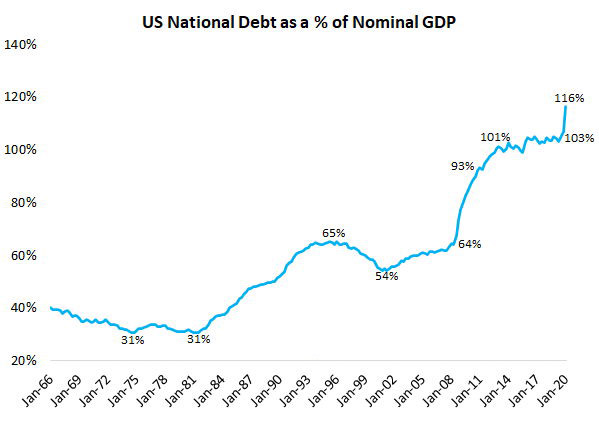 To whom do the States owe money?

About 30% of the US public debt is on the balance sheet of federal agencies, primarily the Social Insurance Fund. The rest is assigned to different public structures. The largest of these public groups are international lenders. According to March 2020 data, international lenders account for almost $4.3 trillion Treasuries. No.1 and No.2 are Japan and China, $1.27 trillion and $1.08 trillion, respectively.

China is gradually reducing the volume of US government bonds in its portfolio. This is due to trade war between countries. Donald Trump is now blaming China for the coronavirus COVID-19 pandemic.

The Fed has a portfolio of $4.1 trillion Treasuries with a total balance of about $7 trillion. Back in February 2020, the balance of the Federal Reserve was about $4.2 trillion.

In addition to fiscal policy measures, monetary stimulus is being actively pursued in the United States to combat the economic shock caused be the coronavirus pandemic. In fact, unlimited QE was announced. The regulator buys up public debt and mortgage securities in the amount necessary for the smooth operation of the markets. Other instruments were added to the buyback program, including bond ETFs.

In addition, the Fed introduced a range of lending programs to support businesses and households. The volume of programs is $300 billion. The US Treasury provides guarantees for these programs. On Tuesday, May 19, 2020, Jerome Powell spoke about his readiness to use the “complete set of tools” to support the economy.

A look into the future

According to estimates of the Committee responsible for the federal budget, by the end of the fiscal year 2020, which ends October 1, the ratio of public debt in the hands of public structures, in addition to federal agencies, and GDP will exceed 100%. Before the COVID-19 crisis, the figure was 80%. According to the baseline scenario, in 2025 it will be about 107%. 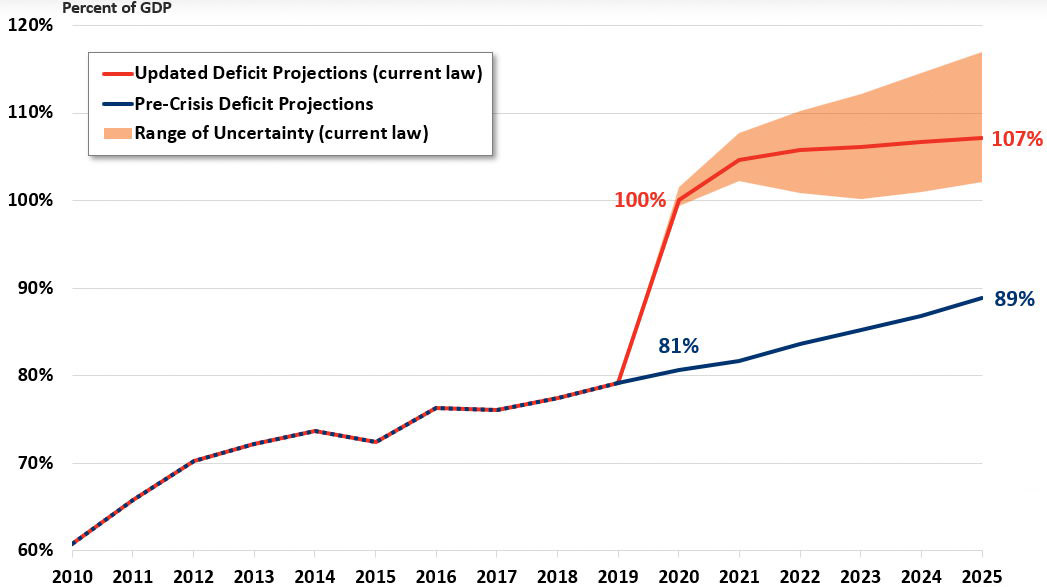 This is an assessment in the baseline scenario. There are still optimistic and pessimistic scenarios. Most likely, additional measures will be taken to combat the economic crisis, which will increase the budget deficit. According to the basic forecast, in 2021 the United States economy will recover sharply. The likelihood of this alignment is high, but still not 100%. 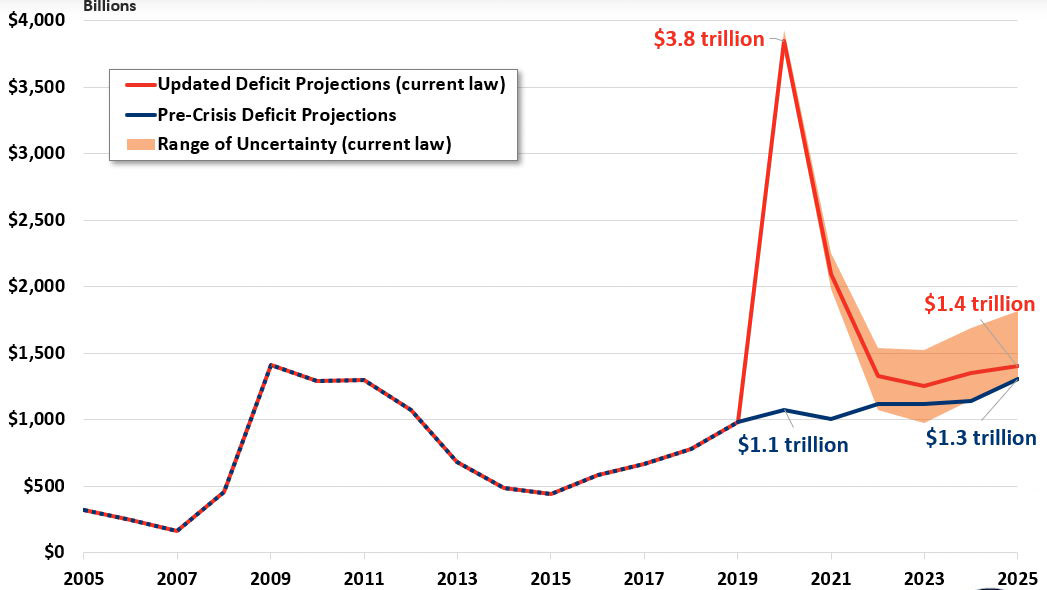 Will the United Stated ever settle debts

In 2019, the US paid $567 billion in interest expense on government debt, which was 17% of budget revenues. The average interest rate was 2.5%. Now the level of debt has increased markedly, but interest rates have decreased. In March, the Fed lowered its key rate from 1.75% to 0.25%. Together with the FED funds rate, the cost of servicing the debt decreased. For example, over the year, the yield on 10-year-old Treasuries dropped from 2.4% to 0.7% per annum. Apparently, the Fed rate will be close to zero for a long time.

Treasuries are US government bonds issued to cover the US federal budget deficit. They are considered to be a risk-free tool, because they are provided with the power of the dollar.

In fact, the instrument is rather conditionally risk-free, because it depends on inflationary trends and the monetary policy of the Fed.

There are 5 main types of Treasuries:

In terms of liquidity, On-The-Run and Off-the-Run Treasuries are distinguished. The first type of securities corresponds to the most recent issue within a certain circulation period. The second type is earlier releases. On-the-run treasuries are more liquid and therefore have lower returns than off-the-run.

There are three main ways to reduce federal debt 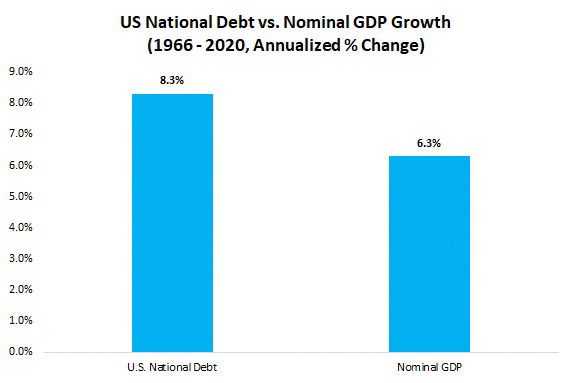 The situation with the US public debt does not worry market participants much. Moreover, fiscal measures to support the economy have contributed to a notable recovery in the US stock market.

Treasuries are considered conditionally risk-free tool. In the event of turbulent conditions in the financial system, their profitability tends to fall. This was well demonstrated by the situation when S&P in 2011 lowered the sovereign rating of the States to AA +. US government bonds went up at that time. Falling Treasuries yield means lower market interest rates, which supports stocks further.

In the long run, the situation may become more deplorable. In the event of negative debt triggers, for example, the dumping of US government bonds by China, the yields may rush up and the stock market will undergo new strong sales.

In addition, when the Fed begins to raise interest rates, the cost of servicing and refinancing debt will increase. This could be an additional factor of pressure on the United States economy.

Margin Trading has become a popular term across many different trading markets, and in recent times it has become very highly regarded in the emerging cryptocurrency...

The world of trading is often seen as a big and intimidating one. There are so many different commodities, currencies, and cryptocurrencies to trade that it can be difficult...

Best Cryptocurrency to Invest in During 2020

While Bitcoin is still very much the most well known, and most widely regarded cryptocurrency around, it is only one in a list of near thousands...

How to amplify earning with margin cryptocurrency trading

Over the past 60 years, AI and machine learning have made a breathtaking jump from science fiction to the real world. Though these technologies are still...

Bitcoin trading has become big business in recent years as people have realised that the new and emerging market place is one that has the potential...

How to Amplify Earning With Margin Trading?

What are binary options in the global financial market

In the global financial market, as in many other areas of commercial activity, there are often categories that seem to the uninitiated person very difficult to understand and use...

Gold and other precious metals are widely recognized as an investment asset class, that is why we would like to tell our readers about current trends...