This preview of weekly data looks at USOIL and XAUUSD which are both making minor corrections in the latest sessions. Gold broke below the latest bullish wedge formation while oil is trying to regain the losses of late last week. This week the important publications include some releases related with the US housing market like the Building Permits set to be released on Tuesday December 20th with market expectations being a minor decrease in the figure and also on the same date there will be the release of Housing Starts which is also expected to drop.

The Canadian inflation rate is set to be released on Wednesday December 21st at 1:30 PM GMT where the market anticipates a slight decrease reaching 6.6% against a previous release of 6.9%. This could be somewhat bearish news for the loonie as decreased inflation might indicate a slow down in the pace of interest rate hike by the Bank of Canada in the near future.

On Thursday December 22 at 7AM GMT the British GDP will be released with the market expecting a decline reaching 2.4% against a previous record of 4.4%. This could create some short term losses on the quid. Even though this might have already been priced in, it could still create some volume on the British pound pairs if we see an actual release of a much different value.

On Friday  December 23rd we have the release of the Japanese inflation rate where the market expects to rise reaching 3.9% against a previous release of 3.7%. This could support the Yen in the short run since it could influence a more hawkish approach for the Bank of Japan to hike its interest rates more aggressively.

Price of oil has corrected last week as optimism over the Chinese economy outweighed concern over a global recession.  Last week the European Central Bank, the Bank of England and also the Federal Reserve in the US all released their monetary policies announcing interest rate hikes in efforts to slow down inflation and support their currencies respectively, while commenting on further interest rate increases until inflation is minimized. This news however would eradicate the prospect of further economic growth in the new year and in doing so curb demand for oil as a result.

The US energy department announced on Friday that it will start repurchasing crude for the Strategic Petroleum Reserve - the first purchases since releasing a record 180 million barrels from the reserve this year in an effort to support the economy from increasing fuel costs.

On the technical side we see the price continuing the downward momentum with the price currently trading just below the resistance level of the 23.6% of the Fibonacci around the $75 area. If the bearish movement is continued we could expect some support around the $72 area which was the last time the price reacted before a minor swing and a second level of support around the $70 price area which consists of the lower band of the Bollinger bands and also the psychological support of the round number. 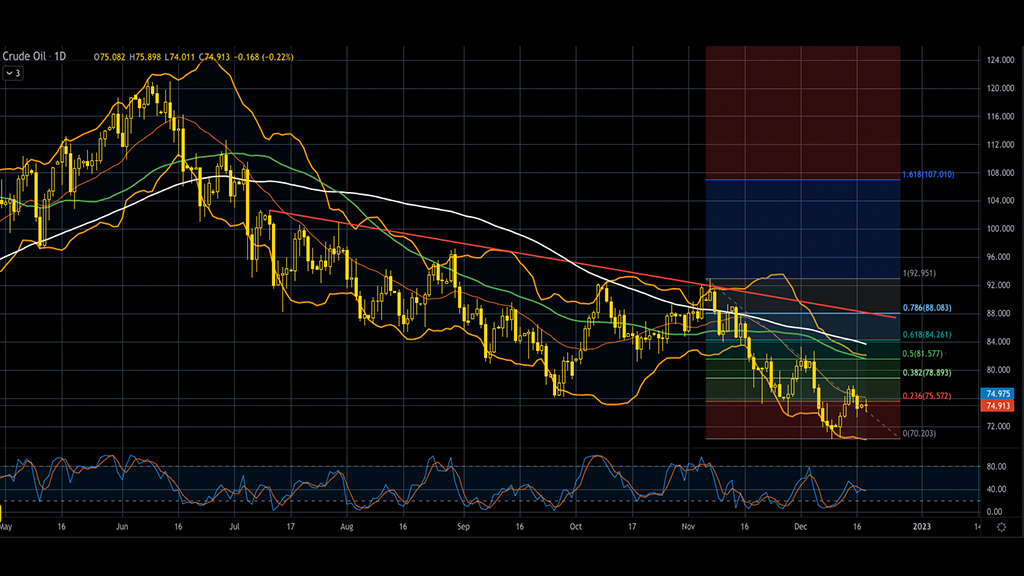 Price of gold declined following the FED meeting last week only to make back some gains on last week's losses after a decline on the US Dollar this Monday. After the Federal Reserve Chair Jerome Powell’s speech last week about the FED’s dedication to stick to its original strategy of further interest rate hikes to minimize inflation, it pushed the price of the yellow metal even lower. For a steady rebound on the gold price to happen we need to see the FED end the interest rate hike.

Although gold is seen as an inflation hedge, higher interest rates raise the opportunity cost of holding bullion. Meanwhile in China , the world’s top gold consumer, Covid cases are on the rise which could potentially affect the physical demand for the metal. 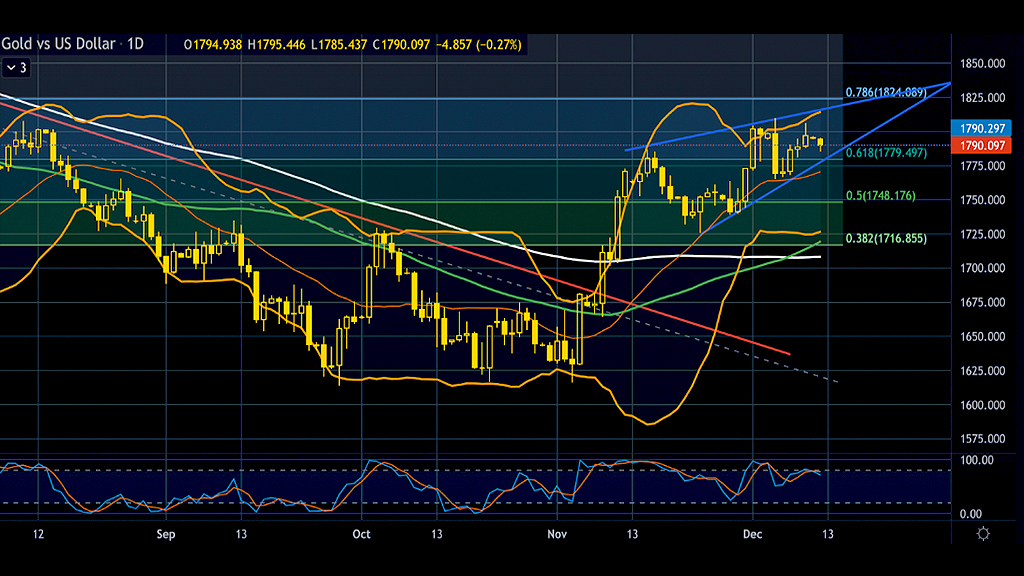 If further continuation to the upside is seen then we can expect the price to face some  strong resistance around the $1,824 area which consists of the 78.6% of the Fibonacci, the upper band of the Bollinger bands and also the upper level of the latest bullish wedge formation.